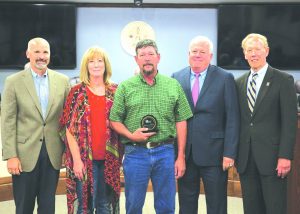 Safety and teamwork in highway work zones are critical to seeing that each worker makes it home at the end of the day.
At the Monday, June 4 meeting, members of the Oklahoma Transportation Commission and ODOT Executive Director Mike Patterson recognized the crews who demonstrated a continued commitment to safety in the past year and the Okfuskee County maintenance crew received the Director’s Safety Award for Division Three.
Counties in Division 3 include Coal, Cleveland, Garvin, Hughes, Johnston, Lincoln, McClain, Okfuskee, Pontotoc, Pottawatomie and Seminole.
The Director’s Safety Awards are presented to the unit in each of ODOT’s eight field divisions and its Oklahoma City headquarters with the best safety record. Consideration is given to safety, housekeeping, training and equipment maintenance.
The men and women of the Oklahoma Department of Transportation work in all conditions and put their lives on the line to help construct and maintain our state’s highways, interstates and bridges.
Safety is ODOT’s top priority and the agency conducts onsite reviews, accident follow-up and ongoing safety education as part of its worker safety program. The total number of employee injury accidents has declined by more than 41 percent in the past year.
The Governor’s Safety Excellence Award is presented annually to the ODOT field division with the best overall safety record in the past year. The 2017 award went to Division Five, which increased its safety performance record by 72 percent compared with the previous year. The Division had two injuries and zero lost days, the best performance of any division in the past decade. Total accidents, accident severity and lost work days are all taken into consideration in determining the Governor’s Safety Award winner.Division Five is headquartered in Clinton and is led by Division Engineer Brent Almquist.
The Progressive Excellence Award recognizes the ODOT field division with the most improved safety rating. The award for 2017 was presented to Division Two, which is headquartered in Antlers under the leadership of Division Engineer Anthony Echelle. The division improved its safety performance by 58 percent since last year.