OKLAHOMA CITY – Governor Mary Fallin today issued this statement after signing emergency rules adopted by the Oklahoma State Board of Health, which establish a framework for patients, physicians, caretakers, and business owners interested in medical marijuana: 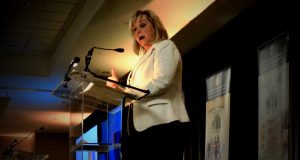 Governor Mary Fallin speaks to a group of city elected officials, staff and representatives at a Main Street conference in early summer in Oklahoma City. Fallin has recently signed the emergency rules for the legality of medical marijuana, which comes after State Question 788 was passed by voters statewide June 26. (JOSH ALLEN/Okemah News Leader)

“These rules are the best place to start in developing a proper regulatory framework for medical marijuana, with the highest priority given to the health and safety of Oklahomans. They are also the quickest and most cost-efficient way to get the process actually started as required by the law passed by the people.

“I expect modifications could occur in the future. I know some citizens are not pleased with these actions. But I encourage everyone to approach this effort in a constructive fashion in order to honor the will of the citizens of Oklahoma who want a balanced and responsible medical marijuana law.

“The state question placed an accelerated implementation period upon the Oklahoma State Department of Health, which is required to start the application process by July 26 – just two weeks away. The Health Department has been working with 17 other agencies the past three months on crafting these emergency rules. Asking the Legislature to pass comprehensive legislation in a special session is not realistic.

“Dealing with medical marijuana is unchartered territory for our state, and there are many opinions, including divisive views even among SQ 788 backers, on how this should be implemented. Discussions have been going on the past few months in and outside the Capitol with no clear-cut agreement. I appreciate the hard work of Interim Health Commissioner Tom Bates and his staff, who take seriously their responsibility to protect the health and safety of all Oklahomans.”