*Make sure and pick up Thursday’s edition of the Okemah News Leader for the full story and interview with Joel Rafael about his 21 years of performing at Okemah’s WoodyFest.*

In what has become a tradition, Joel Rafael will open the musical festivities at this years WoodyFest, marking his 21st performance at the festival since its inception.

Rafael will be performing with John Trudell’s Bad Dog Wednesday at the historic Crystal Theatre in downtown Okemah. 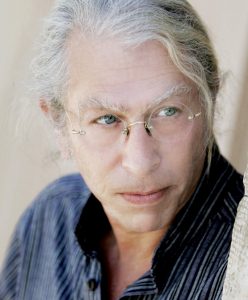 According to a press release from festival organizers, “After their show-stopping set in the Pastures of Pblenty at last year’s WoodyFest, the Wood Guthrie Coalition is thrilled to begin this year’s festival with this special benefit presentation of Joel Rafael with John Trudell’s Bad Dog.”

Trudell passed away in December 2015, and his band, known as Bad Dog, asked Rafael to “carry on Trudell’s work by performing with them,” the release stated.

Trudell, a spoken word activist, which he used in his spoken word music, helped lead the Occupation of Alcatraz Island in 1969 and was chairman and leader of the American Indian Movement from 1973-1979.

“After hearing John Trudell speak at Peace Sunday, in 1982, Rafael became an advocate for Indigenous Rights, sharing John’s words and following his trail for over 20 years, until the two began regularly performing and eventually writing together,” a Woody Guthrie Coalition press release stated.

Rafael’s performance with Trudell’s Bad Dog will kickoff the entire festival and the performances of more than 90 musicians over the three-day music festival.

He’s not just a regular to WoodyFest. He’s an almost lifetime student of Woody Guthrie and his music. This year will mark the 21st year Rafael has performed at the festival, with his first WoodyFest performance being the year the festival began in 1998. He’s not missed a year since.

Tickets to Wednesday’s benefit concert are $40. Doors open at 7:30 p.m. and the show starts at 8. If tickets are still available, they will be sold at the door for $45. All proceeds support the Woody Guthrie Coalition and their efforts to preserve Guthrie’s legacy and to bring the best music to WoodyFest.

“The benefit is to raise money to offset the costs of the festival because the festival costs way more to put on than it brings in in revenue,” Rafael said. “It’s a show that hopefully gets a good attendance so it will raise some money to help with the efforts of the Woody Guthrie Coalition.” …

*Make sure and pick up Thursday’s edition of the Okemah News Leader for the full story and interview with Joel Rafael about his 21 years of performing at Okemah’s WoodyFest.*