A longtime soldier and Okemah resident, Ronn Gott, was recently picked by members of the American Legion to serve as the organization’s Vice Commander for the state of Oklahoma. 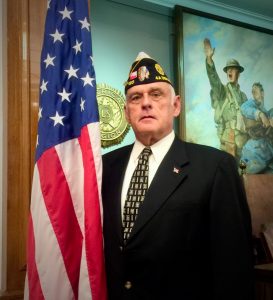 Gott said he’s proud of earning the position, which is decided on by members — about 17,000 currently in the American Legion — at conventions by a nomination and voting process.

“Okemah is a military town. A lot of soldiers are from here and live here, so we’re a very patriotic town,” Gott said. “I’ve just moved up through the ranks with the American Legion, so I’m carrying on the legacy.”

Gott has quite the legacy of his own. He has served as the American Legion’s Okemah Post 0123 Commander since 2008 — a position he still holds.

Once he was voted in as Post Commander, he then was elected a District Commander before being elected Vice Commander of Eastern Oklahoma, holding that position for two years until his selection as Vice Commander for the state.

Gott spent 39 years and four months of his life with the military in three different branches, serving in the Vietnam War with the Marine Corps, then peacetime with the Air Force Reserve before going to Iraq in 2004 with the Oklahoma Army National Guard as Command Sergeant Major.

He said he’s been with the American Legion for “a long time” — well over two decades.