Who ever said hunting is a guy’s thing? Carlee Magness doesn’t think so. The Okemah resident is taking hunting as a woman to another level. 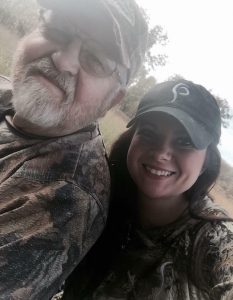 Magness and her father

Magness was recently named host of the upcoming news channel, “Camo News,” for Gen7 Outdoors after a successful African safari and long career as a hunter.

She won the safari from Ka Maoto Safaris when she entered the best turkey hunting photo of one of the popular game birds she bagged earlier this year.

“I had forgotten I had entered the contest,” Magness said. “After I won the safari, I couldn’t pass it up.”

Not only did Magness not remember the photo contest, but she had moved to Alaska where she and her husband were living.

Magness said she decided to move to Alaska after her husband’s 10-year career in the oil field ended after the company he worked for sold out.

“I guess we wanted an adventure, so we moved to Fairbanks,” she said.

She has since moved back to Okemah.

When it came time to take off to Africa for the safari, Magness and her husband packed up for the 10-day trip (two of those full days were spent traveling to and from the African continent).

As for hunting, Magness said she took only her bow. The safari company covered room and board and taxidermy, which is a good thing because the hunter would need taxidermy before it was all over.

She hunted the days she was there, killing a gemsbok with a rifle and a kudu with a bow — the former being a large antelope with a gray coat, distinctive black-and-white head markings and long, straight horns and the latter being another antelope species with a brownish coat, vertical white stripes and long, spirally horns.

Asked why she loves hunting so much, Magness said it all started with her father. She recalled a story of the first time he took her hunting.

“Dad didn’t have boys, so he finally took me hunting,” she said. “The first time we went, we were in a stand together when we saw a deer. I shot it, which was my first deer. I started crying in the stand … because I was excited, but I was also kind of sad that I had killed him.” 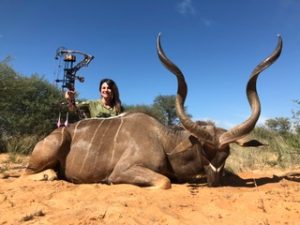 She said she now “hunts all over” and goes after several different game types — mainly turkey and deer.

The hunter is now on her way to a National World Turkey Federation (NWTF) World Slam in turkey hunting, which is a feat only accomplished if a hunter bags each species and subspecies of wild turkey.

According to the NWTF website, “A slam is considered one of the biggest feats in turkey hunting.”

The World Slam is likely the hardest, requiring a hunter to harvest all four U.S. subspecies (Eastern, Osceola or Florida, Rio Grande, Merriam’s), plus the Gould and ocellated wild turkeys.

Magnes has almost all of them, but will need to travel to Mexico and Central America to bag the Gould and ocellated wild turkeys, respectively.

Check out Gen7 Outdoors at www.gen7outdoors.com where you can see Magness on a variety of shows and as a host of “Camo News.”

The Gen7 Outdoors Channel is available on Roku, Amazon FireTV, Google Chromecast, AndroidTV and other streaming locations, such as YouTube and Vimeo.