Carl Alls Real Estate recently welcomed new realtor Cassie Earnest to its team, and while she is a new realtor — only about two months in — Earnest is not new to Okemah. 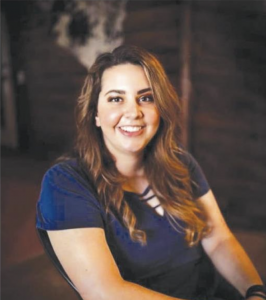 Well known in the area that she’s lived and worked in her whole life, Earnest has spent the last 16 years working at her family’s restaurant, the Hen House — a staple of the local community.

Eventually, though, the day came that she wanted to do something different.

She said she had been mulling over the decision to do what it took to become a realtor for over a year before her husband finally told her, “You just need to do it.”

So she did. She took the test, passed it and was hired by Carl Alls.

“I really like it … I just need to sell some houses,” she said. “It’s kind of a culture shock, going from the fast-paced work at the restaurant to what I do now, but I do like it.”

So far, Earnest said she’s shown a few houses and has a couple listings, and that all-in-all her young realtor career is “going good.”

She explained one of her listings as “a really nice rock home with a Morton building for a shop and an in-ground swimming pool.” Located at 1234 Birch Street, Earnest said she thinks it would make a great home for a family coming into this community.

“I’ve been (in Okemah) my whole life, and it really has a lot of potential as a city,” she said. “As a realtor, I can now help people in the community get in the home they want or help newcomers to Okemah find a great home when they get here.”

Earnest can still be found working at the Hen House occasionally, and she said she does custom cakes on the side.

She and her husband, Clint, have four children: Ty, Kyle, Ryder and Newt. They are 13, 11, five and two years old, respectively.

She can be reached at (918) 623-8780. Visit www.okemahrealestate.com for more information about her listings.