With autumn approaching and football season just around the corner, thoughts turn to those friday night lights. There has been a lot of activity around the Pecan Bowl lately. 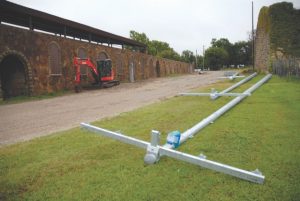 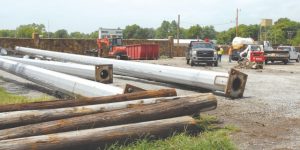 The Okemah Board of Education last year had determined, after much inspection and debate, the old lights were a danger to the public. The bidding process began and some bids were rejected, with the final bid being awarded to Third Generation Electrical in the amount of $326,928.00.

The time has finally come to replace the lights at the baseball/football field complex. The old lights have been taken down. The new ones were delivered on Monday and the plans are, weather permitting, to set the poles this, Thursday, morning and lights on by Friday evening. The new lights will be pre-set and aimed for the best coverage for Okemah’s unique fields.

The new lights are LED lighting, which is a controlled light with pinpoint precision, not floodlights. These lights will be more cost-efficient and have a superior visibility compared to the old ones.

Musco Lighting, who has specialized in the design and manufacture of sports and transportation/infrastructure lighting solutions around the world since 1976, will maintain and monitor the lights for the school with a 25 year warranty.

The board declared the forty-seven old lights, seven metal poles and three wooden poles as surplus at their regular meeting held on Monday, August 13. If anyone is interested in these items, you may contact Mark Shandy at 918-623-7521.

Also at the meeting, the board accepted the resignation of teacher’s aide Stephanie Robison and hired Summer Weddleton as a pre-K elementary teacher on a one year temporary contract, Emily Hill as a teacher’s aide and Brett McMahan as a part time custodian.