The Oklahoma Land Title Association (OLTA), a statewide group of title professionals, continues a successful year under its fairly-new president from Okemah. 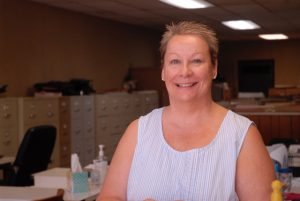 Terri Parrish, who works at Sovereign Abstract & Title of Okfuskee County, took over at the helm of the organization in April, following a good year under the leadership of Michael Cantrell of Wagoner.

“It’s really going great,” Parrish said of her new role. “We are having a successful year, and we are working on a lot of things.”

Some of those things OLTA is working on, Parrish said, are new legislation on predictive filing fees for county clerks, e-notarization and remote online notarization.

She explained that the new legislation and the new notarization issues the association are working on will both help public citizens and be beneficial to the many entities involved in the abstract and title process.

“We have had help with this new legislation and the new things we’ve been trying to do, especially from Senator Roger Thompson,” she said. “He’s been very helpful to us.”

“We’ve also worked with the County Clerk Association, the Oklahoma Association of Realtors and the Mortgage Bankers Association,” she added.

Parrish will continue as president of the eight-member board for one year — until next April, at which time another board member will take over.

She was selected by nomination and vote by the executive board. The decision was not arbitrary. Parrish has spent years working with OLTA, going through the ranks as she’s served.

“I’ve been on the Education Committee … worked my way through that,” she said. “Then, I was a board member for a couple years, then vice-president, then president-elect. This year, they decided to make me president.”

“Right now, I’m getting ready to go to the Colorado Land Title Association convention,” she said. “In 2017, I went to Washington D.C. to visit with lawmakers and meet with our Oklahoma representatives and senators.”

That’s not all, though. In October, Parrish will pack her bags for Los Angeles, California to be the Oklahoma representative for OLTA at the nationwide American Land Title Association convention.

Parrish lives in Okemah with her husband Bill, who she met while at Choctaw High School. They quickly developed a young love, becoming “high school sweethearts,” which prompted a marriage sometime after they both graduated from Choctaw.

She and Bill have two children, Kaitie and Drew. She received her paralegal degree from the University of Oklahoma and has been in the abstract and title industry since 1977.

According to the OLTA website, “The objectives of the Oklahoma Land Title Association shall be to promote the safe and efficient transfer of ownership of, and interests in real property, to provide education, consistent with the purpose and objectives of the Association, to the membership … “

“ … and to the public, to disseminate information to those who regulate, supervise or enact legislation affecting the land title industry, and to affiliated association, to maintain liaison with users of the products and services provided by the members of the Association … “

“… and with the government, and to do any and all things incidental to the promotion and accomplishment of the purpose and objectives of the Association.”