Emotions ran thick Friday evening as author Faith Phillips read from the stage much of the first chapter of her newest release: As I Lay Me Down — a true-crime novel that digs deep into the brutal murders of two young Weleetka girls on a gravel road and another woman years later.

June of this year marked 10 years since the tragedy, but for many, the pain and emptiness still lingers heavily. 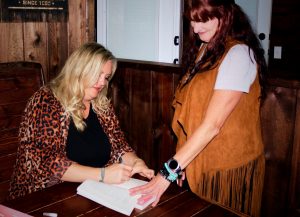 Author Faith Phillips signs a copy of her newly released book, As I Lay Me Down, at an event in Okemah Friday. (JOSH ALLEN/News Leader)

The book-signing event — one of many Phillips is doing with the new release — was held Friday, Sept 7, at the Hen House. It was heavily attended and featured a live musical performance by Wink Burcham.

In June 2008, Taylor Paschal-Placker, 13, and her friend, 11-year-old Skyla Jade Whitaker went for a walk down the sleepy and isolated County Line Road in Weleetka in Okfuskee County — a regular routine for the girls.

This would be their last walk. Both girls were shot to death and left laying.

Investigators with the Oklahoma Bureau of Investigation hatched one of the biggest investigations in state history following the double homicide.

Three years went by, and still no suspect arrest. However, in December 2011, investigators discovered the remains of a woman in a smoldering fire on property near the crime scene on County Line Road.

It would be that discovery — the smoldering body of Ashley Taylor — that would lead them to 25-year-old Kevin Sweat, of Henryetta. Taylor was the fianceé fo Sweat at that time.

She — with information linking Sweat to the murders of Paschal-Placker and Whitaker — threatened to go to authorities, which essentially led to her brutal murder.

Sweat would eventually get charged with all three murders, receiving the charge in the first-degree.

Now … in comes one of the main stars of the case and the novel: Assistant District Attorney Maxey Reilly, who is now an Associate District Judge in Okfuskee County.

Reilly went at the case with hunger and passion for a conviction, leading Phillips to remark to the crowd that the story couldn’t be told from any better perspective than hers. 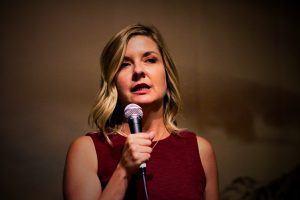 Then-prosecutor for the district attorney’s office in the Weleetka murders case and trial and now Associate District Judge Maxey Reilly at the book-signing event Friday at the Hen House. (JOSH ALLEN/News Leader)

Philips and Reilly each took the stage to explain how much it all meant to them and thanked the audience for their support.

Tears fell from each of the ladies’ eyes intermittently as they spoke. It was clear that the case still weighed heavy on their hearts.

Phillips pointed out that the families of Paschal-Placker and Taylor, two of those lost to these horrific crimes.

From the stage, Phillips told Placker and his family of an excerpt in the book that really touched her — one that she would never forget writing, reading or living.

The excerpt talks of Mr. Placker walking out of his house and “down that dirt road” where his daughter was killed, she said.

“You know, writing that whole chapter arrested my heart,” Phillips explained, holding back tears. “I started to read that excerpt, and every time I did … I mean every time … I just wept. No matter what I did, I just cried.”

“It’s that kind of story,” she continued. “None of those girls or their families and friends deserved this.”

Phillips explained that the story was that kind of story — touching, heart-wrenching and sad, but that it is also redemptive once Sweat was convicted.

Following speaking from Phillips and Reilly, there was a reading by the author of excerpts from the book’s first chapter. The audience sat in silence, minus the sounds of sniffling and wiping of tears away as the emotional words filled the venue.

A live musical performance concluded the event as Reilly and Phillips joined the crowd to sign copies of the book.

The new release is available at book stores and Amazon. Those interested can also visit www.readbooksby.faith for a catalog of her work and to order As I Lay Me Down.