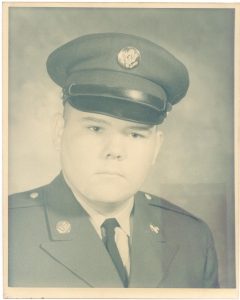 was born on August 31, 1951 in Hanna, Oklahoma to Andrew Jackson Mooring and Opal Lee (Burgans) Mooring. He departed this life on September 19, 2018 in Seminole, Oklahoma

At an early age his parents moved to Stanfield, Arizona to work. Dale attended Stanfield Public School and Casa Grande High School. After graduating Dale enlisted in the U. S. Army and was stationed in Okinawa, Japan. Upon receiving an honorable discharge Dale returned to Okemah to make his home and reside around his family. Dale worked in local restaurants as a cook for several years before being recruited by Country Clubs in Joplin, Missouri, Enid, Oklahoma and Las Vegas, Nevada. Dale returned to Okemah and accepted a position of head cook at the Okemah Nutrition Center in 1996 where he remained until his death. Dale loved his work and the people he served. He will be missed by family and friends for the loving person he was and for his quick wit. Dale could keep a person laughing hour after hour and will be remembered by family for his wonderful personality and sense of humor.

Dale’s cremains will be interred at the families plot in Hillabee Cemetery at Hanna, Oklahoma at a later date when family members and friends may attend.