A two-car accident Tuesday on Interstate 40 resulted in four individuals being transferred to local hospitals by ambulance where three of the four were treated and released the same day, the other was admitted in stable condition. 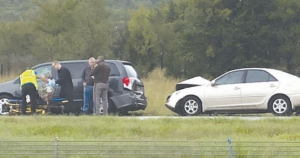 Just after 10:30 on the morning of October 9, a 2006 Toyota Camry, driven by a Dora Higgins, 65, of Independence, Missouri, “departed the roadway to the right and struck” a 2016 Dodge Caravan that was “parked on the westbound shoulder,” according to a report by Oklahoma Highway Patrol Trooper Dion Wild.

The Caravan was driven by Gene Williams, 66, of Wetumka, and the accident happened about a third of a mile west of Mile Marker 229 on the interstate in Okfuskee County.

Williams had with him two passengers, 62-year-old Martha Smith and 64-year-old Jack Smith, both of Wetumka.

Higgins’ Camry, which struck the Caravan primarily on the driver’s side, caused fairly significant damage and resulted in her being transported by ambulance to Creek Nation Hospital in Okemah, Wild said in his report. She was treated and released.

The Smiths were also treated and released from Creek Nation Hospital in Okemah after being transported there by ambulance.

Williams was initially taken by ambulance to Creek Nation Hospital, but had sustained a back injury that required he subsequently be transferred to St. Francis Hospital in Tulsa. He was listed in stable condition.

The Trooper that investigated the crash reported the condition of both drivers to be “apparently normal,” citing the cause of the collision to be “unsafe speed, rain or wet roadway.”

Wild also reported that seat belts in both vehicles were “equipped” and “in use.”

As is standard, the investigatory report states towards its conclusion: “This report is based upon the trooper’s investigation of this collision. It may contain the opinion of the trooper.”