Skip to content
FacebookEmail
| logout
OKMULGEE, Okla. – Among the several departments and services Muscogee (Creek) Nation offers to citizens, and at times the public, the Mvskoke Language Program’s goal is to preserve, maintain and revitalize the Mvskoke language through ongoing projects. 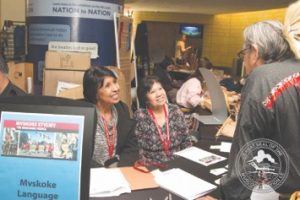 Funded through MCN and National Council support, the program began in 2004 as a Resource Center for those interested in learning or teaching the language of our people.
The Beginner Mvskoke Language Class is a new class offered to the public at no cost. The class is held every Monday and Wednesday from 12 p.m. to 1 p.m. and is taught by Gracine Hicks, a program instructor or ‘myhayv’.
The Intermediate Mvskoke Language Class is a continuation of an ongoing class taught by myhayv Rebecca Barnett that started in August of 2017 and is held Tuesday, Thursday and Friday from 12 p.m. to 1 p.m.
The program also has three instructors who teach at jurisdictional schools and head start programs including Muskogee, Wetumka, Okemah, Wainwright, Tulsa, Okmulgee, Checotah, Eufaula Head Start Centers, as well as Okmulgee Day Care and the Eufaula Boarding School.
Mvskoke Language Program Manager Judy Montiel said about 250 to 275 individuals receive the language education on a weekly basis.
For those who are unable to attend the weekly classes, other resources are available at no cost such as, CD’s, DVD’s and Resource Packets that contain crossword puzzles, word searches, coloring books and the Mvskoke alphabet and two and three letter sounds.
As part of preserving the language, the program has an ongoing Hymn Project to provide free Mvksoke Hymns booklets. Different singers are brought in and given a small incentive to record hymns of the department’s choice.
“Our hopes with that are not only for an archive purpose, but also for those that are wanting to learn some hymns and we do get those requests,” Montiel said.
The New Testament Bible is also available in Microsoft Word format, as well as the audio version. The CD version is nearing completion and will be available soon, as well.
A yearly calendar, a weeklong emersion camp for Muscogee (Creek) youth, along with several other projects and resources available, are ways the program can do its part in maintaining the Mvskoke culture for years to come.
“It’s important because if we don’t learn and teach the language, we lose it,” Montiel said. “It’s part of our identity as who we are as Mvskoke people. It’s a doable thing to learn the language. I just feel it’s important for each of us to have a role in either teaching it or learning it.”
In November 2017, the program received the Perry Aunko Indigenous Language Preservation Award at the 20th Annual Dream Keepers Awards by the Greater Tulsa Indian Affairs Commission for the exposure of the Nation’s language through events and education.
The program plans to expand community outreach efforts by adding a coordinator position in the future that will create partnerships with additional schools.
For more information on the Mvskoke Language Program and the available resources, visit the website at www.mcn-nsn.gov/services/mvskoke-language-program or call 918-732-7724.
Posted in Area News