A 17-year-old girl, reported as a runaway earlier this month is still being sought by authorities after missing for two weeks. 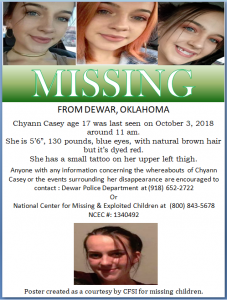 Chyann Kay Casey was reported a missing runaway by the Dewar Police Department October 3, which is the time she is reported to have last been seen, likely around 11 a.m.

The Dewar Police Department has now requested the help of the Oklahoma State Bureau of Investigation (OSBI).

According to a recent OSBI news release, Casey reportedly left with her boyfriend, Seth Allen Roberts, of Okemah, The release identified Roberts as a white male, standing 5’8” and weighing about 163 lbs.

Casey is a white female, standing about 5’6” and weighing around 150 lbs. Her hair is naturally brown, but has most recently been dyed a red or auburn color.

She has a small tattoo on her upper right thigh.

According to the OSBI, leads are being followed but not much more can be released at this time.

The recent news release did say that Casey and Roberts could be headed to Roberts’ mother’s home at 6 Big Sur Way in Pacifica, California.

Anyone with information concerning the whereabouts of Casey or Roberts or any events surrounding Casey’s disappearance should cont the Dewar Police Department at 918-652-2722.