The first-degree murder trial of Michael Magness started this week with the first witnesses being called Tuesday after a grueling day of jury selection Monday. 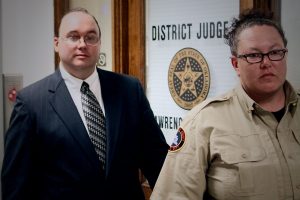 Michael Magness is seen being escorted into the Okfuskee County District Courtroom for jury selection Monday, beginning his trial for the alleged first-degree murder of his wife, Elizabeth, in March 2015. (JOSH ALLEN/News Leader)

The prosecution, led by Assistant District Attorneys Laura Farris and Emily Mueller, allege that Magness deliberately and with malice aforethought shot his wife, Elizabeth Magness, in the head with a 9mm handgun on the night of March 14, 2015 or early morning of March 15, resulting in her death.

Jury selection began about 9:30 a.m., which would see voir dire questioning by the prosecution and Magness’s defense team last the entire day, to the point that it seemed selection would go multiple days.

Judge Parish made it clear, however, that he was getting a jury of 12 picked before the panel would be dismissed for the day.

“I want to let everyone know,” Parish said to the courtroom full of potential jurors. “We’re getting a jury picked today … one way or another.”

That statement was made just before 4 p.m. It would take until almost 6 that evening to get it narrowed down to 12 jurors and two alternates for the case.

Selected jurors consisted of eight white men and four white women, varying rather widely in age. They were sworn in at 5:35 p.m.

The state’s first witness called was father of the victim, Sam Wilson, whose hours-long testimony was wrought with emotion as he explained his view of Magness and his daughter’s relationship, their lifestyle, problems and children.

During that testimony, Farris asked Wilson how he felt about Magness, to which he responded, “(My wife and I) were scared of him,” adding that he “exhibited what I would call controlling behavior.”

At cross examination, Stevenson rebutted that being evidence that Magness is a murderer by asking Wilson a number of questions that cast doubt on the conclusion the father had come to by getting him to admit multiple times that there could be alternate reasons for Magness’s behavior, before and after the alleged murder.

That pattern continued between Stevenson and Wilson for his answers to most of the state’s questions, though Wilson did bring up instances of circumstantial evidence that could point to Magness’s guilt.

April Crouch and her husband, Dustin, would be the state’s second and third witnesses. Both explained problems they saw in the marriage of the victim and Magness, including bouts of depression and mental health issues that eventually led both witnesses to say they encouraged Magness to end the marriage with divorce.

“Magnesses don’t get divorced,” is the response both witnesses said the defendant gave to that suggestion.

On the night of the alleged murder, Magness was staying with the Crouches. Initially and throughout the investigation, both witnesses accounted for the defendant’s whereabouts that night, saying Magness would not have been able to leave their house during the night without them realizing it.

At trial this week, that changed and both said it could be possible that he left and came back through the back door without them knowing, undermining what seemed an attempt at an alibi for Magness.

Stevenson pointed to differences in statements given by the Crouches to investigators on multiple occasions, which seemed to put into question the credibility of both witnesses.

Consider this article a limited, quick look at what was presented before press time this week. As of this writing (Tuesday evening), only one day of witness testimony has been heard, meaning the state still has more than 50 witnesses to call. It’s very early, and there will be updates throughout the trial published here.