With witnesses taking the stand that have recalled events leading up to the homicide and investigators and specialists who have testified to findings or analysis after the murder, the prosecution still rests heavily on a circumstantial case, with no physical evidence yet to connect Magness to the crime. 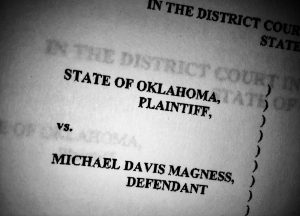 Okfuskee County District Judge Lawrence Parish told the Magness defense team at the end of the day Monday to get their witnesses on standby and get ready to present their case upon the completion of the prosecution’s presentation of its theory. ADA Laura Farris said she expects the prosecution to rest its case sometime on Tuesday. (JOSH ALLEN/News Leader)

No physical evidence does not equate to no evidence at all … there has been presented what could be called a mound of circumstantial evidence that the prosecution claims paints a picture of marital issues and financial strife leading to murder.

It was revealed Monday, during Titsworth’s testimony that he discovered a family life insurance policy that had been taken out by Magness, which made him the beneficiary of $250,000 upon Beth’s death.

Magness’ wife, Elizabeth, known by family and friends as Beth, was found deceased with one gunshot wound to the left side of her face on March 15, 2015. She was found by Magness, who the prosecution alleges killed her sometime in the night before (March 14, 2015).

Magness and their two children had stayed the night with longtime friends, Dustin and April Crouch, on the night of March 14, leaving Beth at home alone. The prosecution claims Magness, sometime between 1 a.m. and 4 a.m., left the Crouch’s undetected, drove the almost 20 minute drive to his home in Okemah, shot and killed his wife and returned to the Crouch’s.

The defense will argue that Magness did not leave the Crouch’s that night and that an unknown intruder entered the Magness home in Okemah to steal the guns inside when Beth unintentionally walked in and was shot as a result.

The prosecution pointed out, by way of testimony by OSBI Crime Scene Investigator Janell Daggett that the house showed no signs of forced-entry. The gun cabinet in one of the closets of the home did show signs of being broken into, which was locked with a combination lock.

The lock was still engaged, but the hasp or hinge mechanism was missing one of the two pins that held it together, allowing the cabinet to be opened. All the guns, save for one rifle that was held together by electrical tape, were missing, according to testimony from investigators.

Earlier in the trial, Dustin Crouch gave testimony about the pin that was missing from the hasp, in which he said had been missing for some time – replaced by a thick piece of wire that he had fashioned into a ‘C’ shape. Crouch had put the hasp on the cabinet originally, and only his fingerprint was found on it, according to testimony Monday by OSBI Latent Evidence Examiner Shana Wilson, which stands as the only print found or examined in this case.

Magness told lead investigator Kurt Titsworth in a videoed interview – played for the jury – during the investigation that there were a few rifles in the cabinet, as well as a Glock 9mm, which witnesses testified several times was usually with him. To that point, at least three witnesses (employees of K-Bar) testified to seeing Magness’ 9mm only at the restaurant.

Magness told Titsworth he just so happened to take the 9mm out of his feed truck the day before Beth’s murder and put it in the gun cabinet. According to Magness’ defense, the 9mm and its case were stolen also.

OSBI Criminalist Kathryn Crandell, ballistics specialist, took the stand Friday to testify about the bullet and firearm that killed Beth, which was a 9mm. Crandell compared the casing and projectile from the crime scene to casings and bullets recovered by Titsworth from a pasture where Magness had told him he had shot at a cow’s skull for target practice just a few days before Beth’s murder.

Crandell’s comparison showed the bullets and casings recovered from the field near the cow skull were all fired from the same weapon, a Glock 9mm, which Titsworth reiterated Monday when he took the stand. Likewise, Crandell concluded that the same type and brand of weapon that fired those casings and projectiles, based on class characteristics, matched the type of firearm that was used to shoot Beth.

“With the bullets that you identified only class characteristics, you can’t say that those bullets came from the same gun,” defense attorney Curt Allen asked during cross-examination of the ballistics specialist?

The state also called Friday OSBI Senior Criminalist Muriel McRorie, who testified to being the technician responsible for testing Magness’ clothing and hands for gunshot residue (GSR). McRorie’s first GSR kit, done on the defendant’s hands, was negative for GSR – none detected.

Another kit was done on the left and right front side of Magness’ sweat pants and another on the front of his shirt. No GSR was detected on his shirt, but trace amounts were found on the front of the defendant’s sweat pants. The testing area was from the waist to the knee.

However, the GSR detected was in such a small quantity that McRorie had to conclude that there was “no way to know” if what was found on Magness’ pants came from an actual gun.

“No,” McRorie responded. “(The finding) is non-conclusive.”

On Monday, ADA Farris started the day by calling an OSBI DNA analyst to the stand, who attempted to find and identify blood and seminal fluids at the scene of the crime or on any of the evidence collected. The analyst tested things like Magness’ eye glasses, his sweat pants, t-shirt, his underwear, socks, fingernail clippings from Beth, hair follicles and a swab of the shell casing found at the scene.

In the three separate tests done by the analyst, no blood was found on any of the items, and only the combination lock from the gun cabinet contained any DN, which was a mixed profile. When compared to a known sample of Magness’ DNA, his profile did show up in the mixed profile from the lock, meaning he could “not be excluded” as the contributor with a 1/26 population variation, the analyst said. In other words, one out for every 26 people tested against the profile found could show up a match, as well.

This case is being heard in front of Okfuskee County District Judge Lawrence Parish, who told the Magness defense team Monday to get ready to start presenting their case sometime on Tuesday as the prosecution prepares to rest its case.