The Magness trial is over. After concise closing statements by the prosecution and a passionate plea in a final argument by the defense, the jury deliberated for right around three hours Wednesday before finding Michael Magness guilty of the first-degree murder of his wife, Beth Magness, in 2015.

The case was heard in front of Okfuskee County District Judge Lawrence Parish. 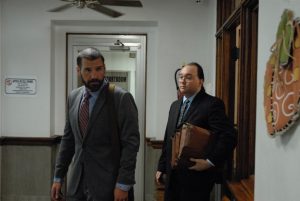 Defense attorney Jarrod Stevenson, left, walks out of the courtroom with his client, Michael Magness, this week. Magness was found guilty of the first-degree murder of his wife Wednesday. (JOSHUA LOGAN ALLEN/News Leader)

After testimony that went multiple days with the case’s lead investigator, OSBI Agent Kurt Titsworth, the state lay its case to rest Tuesday, giving the defense the floor to present its theory for why Magness is believed to be innocent of the first-degree murder, which started later that day and went through Wednesday.

Titsworth made for the state’s final witness after hearing compelling testimony from Justin Scrimshire about statements Magness made over a couple lunch outings around and after the time of Beth’s murder, as well as testimony from the medical examiner and a former cook at the K-Bar restaurant, Caleb Phillips.

Scrimshire, a staffer of the Oklahoma House of Representatives at the State Capitol and childhood friend of Magness, told the jury of a lunch he and the defendant went on in the Oklahoma City about a week before Beth’s murder. The witness claimed he and Magness were discussing the K-Bar restaurant and its financial struggles when the defendant told him he had “a good feeling things were fixing to get better.”

He told of another lunch meeting with Magness, just a couple weeks after Beth’s murder on March 31, 2015, where he said Michael made reference to “Beth’s eye bulging out of her eye socket” when Magness found her body. It may have been this testimony and a couple others’ testimonies about Magness’ reference to the victim’s eye bulging out of its socket that most contributed to Magness’ conviction.

In the crime scene photographs shown to the jury earlier in the trial, Beth’s eye was not in that described condition. According to testimony by Oklahoma Chief Medical Examiner Dr. Eric Pfeifer, the shot was close enough to it that the eye would have bulged out of the socket because of the concussion of the close-range gunshot, but only for the first several minutes after the shot before returning to its normal position. This, the prosecution alleged, means the only way Magness would have seen Beth’s eye in that way is to have been the shooter.

The prosecution leaned heavily on this during closing. The defense pointed to it all as circumstantial.

Phillips, who was basically interrogated as a suspect several times shortly after the murder by Titsworth, was questioned extensively by the defense Monday, which used the testimony as a means to cast more doubt on the state’s case.

Prosecutor Emily Mueller read aloud to the jury a life insurance policy taken out on Beth by Magness that put him as beneficiary of $250,000 upon her death. It was presented as evidence for a main part of Magness’ motive in the case.

Upon the resting of the prosecution, the defense called Mary Magness, mother of the defendant, to the stand, along with Okfuskee County Jail Administrator Steve Avalos late Tuesday.

Magness’s mother testified to the defendant’s character and odd sense of humor. Avalos testified to the height, over 5’10”, and weight of Magness when he was booked into the jail shortly after Beth’s murder. The testimony lay in stark contradiction to the earlier testimony of Rhonda Hill, who was witness to seeing a man she gave a description of on the night of the crime that the prosecution used to point to Magness.

In closing, defense attorney Jarrod Stevenson said not one piece of physical evidence in the case linked Magness to the crime. Earlier, Titsworth answered the defense’s “no physical evidence” claim by saying the fact that it was Magness’ registered 9mm being the gun that killed Beth was enough physical evidence to connect Magness. The defense, however, didn’t argue that it was his gun used, but they said it was used by the thief who had stolen that gun along with the others when Beth caught them in the act and was shot with the stolen 9mm. It was not recovered along with the other guns in the case.

The defense pleaded with the jury to consider that the evidence shows Michael not ever leaving the Crouch’s on the night of Beth’s murder. Stevenson said the life insurance claim was taken out several years before Beth’s murder, was a joint-policy that covered them both of them and was taken out after they bought the house in Wisconsin so if anything happened to them their children could pay the house off.

In the end, circumstantial or not, the mountain of coincidences in the end was compelling beyond any reasonable doubt for the jury. All 12 were asked individually by Judge Parish, and all 12 said they believed Magness, in malice and premeditation, killed his wife. He was found guilty.

The jury suggested punishment to be life in prison without the possibility of parole. Parish set official sentencing for November 28 at 11 a.m.