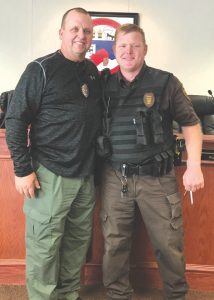 Doug Danker was promoted from Sergeant to Assistant Chief on Tuesday, November 27. Okemah Police Chief Ed “Skeeter” Smith said that Danker is only the fourth officer to hold the rank of assistant chief during his tenure.

He had this to say about Danker, “I’m very pleased with Doug and his commitment to the Okemah Police Department and the citizens of Okemah. He works tirelessly serving the people. His promotion is something that he as earned.”

Danker was honored by the promotion and commented, “having grown up in Okemah and choosing to raise my family in the area, I have a vested interest in the community. I am honored to be able to serve and protect the citizens of Okemah, and I look forward to working more closely with