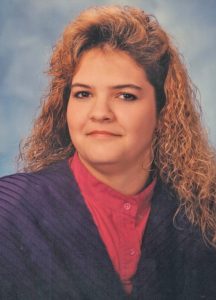 Kellie Nycole Marshall was born June 26, 1976 in Henryetta, Oklahoma to William Burl Williamson and Rhonda Sue (Wilson) Williamson and passed from this life December 26, 2018 in Oklahoma City at the age of 42.

Kellie was raised in Mounds and attended the local school system. She was a graduate of Mounds High School. As a young lady she began working for the Borden Milk Corporation Distribution Center in Tulsa.
She loved sports including basketball and softball and enjoyed arts and crafts and crocheting.

She was preceded in death by her maternal grandfather Jess Robert Wilson, her paternal grandparents Cecil and Leo Williamson, her step-grandmother Ola Mae Potts Hemphill and step-grandfather Leo Cruce Brown.

Funeral services will be Monday, December 31 at 2:00pm at the Pentecostal Holiness Church in Okemah with Rev. Jeremy Fairres, pastor, officiating. Interment will follow in the Oakdale Cemetery in Paden under the direction of Williamson-Spradlin Funeral Home of Wetumka and Weleetka.