Martin Luther King, Jr. and his legacy as a crusader for the equal treatment of black people during a time when such an idea seemed far-fetched, at best, and impossible, at worst, was celebrated across the nation Monday, January 21. 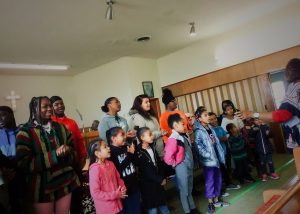 Not all cities, towns, communities and people celebrated the day, unfortunately, but Boley certainly did, doing so in a way that would have likely pleased King, a devout Christian minister — a mid-morning-to-lunch church service at the town’s historic Ward Chapel.

With such emotion, such passion, such reverence toward King, his work and his legacy, citizens and clergy lifted song and praise to commemorate the reason for the day, pointing to the biblical teachings of Jesus and other scriptural references as the catalyst King used to start the fire that he hoped would burn down the injustice suffered by the black race in this country.

King’s fire still burns to this day, some five-and-a-half decades after President Lyndon Johnson signed the Civil Rights Act in the summer of 1964.

Boley’s MLK Day ceremony was serene and peaceful. With eyes closed, the sounds of a people desiring freedom, fair treatment and justice for all could be heard in the sounds of African-American spirituals.

The nostalgic notes rang throughout the century-old, small church chapel … MLK was to be praised that day, and not one person there didn’t first give thanks to Jesus for “redemption from sin,” then Dr. King for successfully fighting the institutionalized racism that had befallen them in the wake of Jim Crow America.

Titled “Slip Through the Cracks,” the service was fierce in its implications towards the relevance of King’s message in today’s society.

“God is a god of all people, and there is no supremacy wrapped up in pigmentation or lack thereof,” Pastor Kenneth Grayson, the event’s keynote speaker, said from the podium on the stage of the chapel. “I remember (King) stating in his address that black supremacy is just as dangerous as white supremacy and that supremacy is to be condemned in all its forms because the only one who is supreme is God himself.”

Grayson, who is from Boley originally, is now the pastor of Israel Chapel in Spencer, Okla. He was invited to be the special guest speaker of the MLK Day event after Elder Johnny Magness said he saw him speak at a similar event last year, telling the crowd of his “wonderful oratorical skills,” much like King, and his reverence for the “Word of God.”

The speaker discussed the 61st chapter of Isaiah, correlating the oppression faced by black people in America to the Jewish captives in the Old Testament before going into the theme of the celebration.

“America has some barrier issues … Dr. King had to deal with some barriers that were constructed by the governmental, institutionalized racism of that day … but there were cracks in those barriers,” Grayson said, his cadence rhythmic, his tone and volume falling at times and rising at others. “King slipped through those cracks, but he was not content with just slipping through the cracks, he was intent on busting through!”

“Those barriers are still there … there are still barriers that keep us from loving like we ought to … prevent us from having compassion for all mankind,” he continued. “Racism is littered all over the history of America. Too often the history books are filled with my demographic as the drug dealer, pimp, lazy, crazy, a killer, criminal … the media writes us in stereotypes, but no one hears about the (black) doctor, the pastor, the teacher, socialite, inventor, philanthropist and, oh yes, the president.”

So many more hard-working, notable and praiseworthy men and women than MLK were involved in the Civil Rights Movement that swept through the country in the late-50s and throughout the 60s — so many that probably should have holidays in their own rights. However, it was King that established himself a leader, a fighter, an impatient observer of injustice and inequality in a country that touts the line in its Declaration of Independence that “… all men are created equal.”

Grayson concluded with a call out to the black youth in America, discussing the bad influence of the negative side of hip-hop culture and the perils of its degradation of women.

As for today and why honoring, teaching and remembering the life and legacy of Martin Luther King, Jr. is important, Grayson said of the still oft-prominent racism in this country:

“So as you slip through the cracks, knock down some of the barriers as you go through for the next person … and next time, instead of slipping through the cracks, just go ahead and bust through that barrier. Destroy the barrier, the wall of injustice … for it is time for us to make our mark on the fabric of history … because the only barrier that’s real is the barrier in your mind, and you are too strong.”

The MLK Day celebration included many door prizes and saw its conclusion over homemade food at the Boley Community Center for lunch.

The small and originally incorporated-black city has been celebrating the day since about 1976, less than 10 years after King’s tragic assassination.

This year, the event was organized by Elder Johnny Magness, Marie Grubbs and Zonda Magness.

The day of observance for King as a federal holiday was signed into law in 1983 by President Ronald Reagan and was first observed three years after that. Many states resisted recognizing the day, though, and it was not officially observed in all 50 U.S. states until the year 2000.