The Okemah basketball teams split wins and losses this week with the Panthers defeating visiting Latta High School and the Lady Panthers narrowly losing after a hard-fought match for the teams’ annual homecoming game. 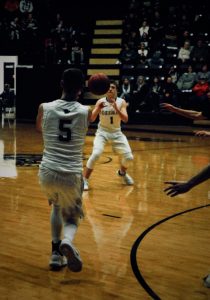 Struggling on offense throughout the game, the Lady Panthers struggled to get anything to fall, though not a whole lot of baskets were falling for either team. The score at the end of the first quarter was 8-11 in the visitors favor.

Latta out-rebounded the Lady Panthers on both sides of the ball, especially grabbing many more offensive boards, which led to unanswered points that only served to knock down the Okemah girls more.

The second quarter saw a bit more scoring for both teams, but with the Lady Panthers trailing most of the game, the deficit couldn’t be made up. The scoreboard read at halftime 18-21.

Quarter three started similarly to the first of the game and saw the girls struggle to find a rhythm. Latta, however, was beginning to get fairly effective offensively, and the deficit increased to eight points. Going into the final period, the Lady Panthers were down 22-30.

That final period almost saw a comeback as the Lady Panthers rallied. About midway through the quarter, they had brought it to a four-point game and trailed 30-34.

The time kept ticking, though. By the time there were only a couple minutes left, Okemah was still behind and were forced to foul time and time again to control the clock.

Unfortunately for the home team, Latta made good on most of its visits to the foul line and the deficit only increased until finally, the game ended with the scoreboard reading over the heads of defeated Lady Panthers 37-44.

The Panthers, on the other hand, wouldn’t accept defeat. After losing the tip-off, Latta took first blood with a basket, but Okemah answered. The score stayed 2-4 for what seemed like a while before the first quarter ended with the Panthers down by six, 10-16.

For much of the first half, that was the story. Okemah trailed. However, with just about a minute or so before halftime, the Panthers rallied for the lead, grabbing it for the first time only momentarily before Latta put in another field goal just before the halftime buzzer sounded. The score was 22-23.

The game stayed close after the second half started. In the third quarter, the Panthers took their biggest lead since the start, making the score 31-28. They’d keep that three-point lead through the end of the that quarter, going into the final period with a score of 37-34.

The fourth quarter was ruled by the Panthers. They increased their lead, then played a game of ball- and clock-control. The final score would end up 53-49, making for a 14-point victory for their hometown crowd.

The Okemah teams now (as of press time Tuesday) prepare for tournament play in the annual 66 Conference Tournament, which will run all week.