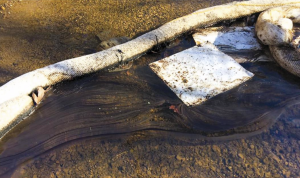 Interim City Manager Dustin Danker informed city council members at their regular meeting February 25, the oil found at Okemah Lake is not a new leak. The cleanup continues on the same leak.

According to Danker, Enerfin believes they are approximately 90 percent complete with the cleanup. Danker reported the Corporation Commission disagrees with Enerfin, stating they are only about 50 percent complete as of Monday, February 25.

Danker spent most of his weekend at the contaminated area talking to residents and the Corporation Commission, trying to resolve the issue. Danker said there is a meeting scheduled for Friday, March 1 in Oklahoma City where officials from the Corporation Commission and representatives from Enerfin will affirm the agreement moving forward. Danker said the cleanup will take some time.

Mayor Mike Fuller complimented Danker at the council meeting Monday night for his willingness to “go the extra mile” during the weekend to engage the Corporation Commission.