As it goes every year, the State of Oklahoma releases its findings of school districts’ performances in what it calls the “Oklahoma State Report Card.” 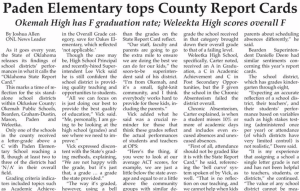 Not one of the schools in the county received a letter-grade above a C with only Paden and Graham Elementary School reaching that, though at least two to three of the districts had ’N/A’ in their overall field.

Okemah Public School campuses — Oakes, the middle school and high school — received nothing higher than a letter-grade of B and only Ds in the Overall Grade category, save for Oakes Elementary, which reflected ‘not applicable.’

Though the case may be, High School Principal and recently-hired Superintendent Lee Vick said he is still confident the school district is providing quality teaching and opportunities to students.

“All we can focus on is just doing our best to provide the best quality of education,” Vick said. “Me, personally, I am going to be looking at the high school (grades) and see where we need to improve.”

Vick expressed discontent with the State’s grading methods, explaining, “We are not happy with the grade, but it’s just that, a grade … a grade the state provided.”

“The way it’s graded, however, using a bell curve, only does a disservice to the school, its faculty, students and parents,” he said. “It guarantees that some (during testing) are going to fail, no matter how hard they may work for it.”

Notwithstanding, Vick stayed firm in his assertion that Okemah Public Schools are providing and education far better than the grades on the State Report Card reflect.

“Our staff, faculty and parents are going to go the extra mile to ensure we are doing the best we can do for our kids,” the soon-to-be superintendent said of his district. “I’m from Okemah, and it’s a small, tight-knit community, and I think everybody works hard to provide for these kids, including the parents.”

Vick added what he said was a crucial reminder for those that think these grades reflect the actual performances of students and teachers at OPS:

“Here’s the thing, if you were to look at our average ACT scores, for example, we are just a little below the state average and equal to or a little above the community groups with similar demographics to ours … so, that said, I feel as though we are still providing a quality education for our students.”

Weleetka Superintendent Chris Carter also expressed frustration with the bell curve grading system used by the state, specifically citing the way the “Chronic Absenteeism” was graded and the grade the school received in that category brought down their overall grade to that of a failing level.

Weleetka High School, specifically, Carter noted, received an A in Graduation, a C in Academic Achievement and C in Post Secondary Opportunities, but the F given the school in the Chronic Absenteeism failed the district overall.

Chronic Absenteeism, Carter explained, is when a student misses 10% or more of academic days and includes even excused absences and unexcused absences.

“First of all, attendance should not be graded like it is with the State Report Card,” he said, referencing the ‘bell curve’ system spoken of by Vick, as well. “That is no reflection on our teaching, and we cannot help when kids get sick or when parents keep them out of school for personal reasons.”

Carter, in the end, did say he and his staff, faculty and parents will have to use this report card to learn from.

“We are going to have to look at that and discuss some things, look at our policies and procedures and possibly talk with parents about scheduling absences differently,” he said.

The school district, which has grades kindergarten through eight,

“Expecting an accurate reflection of a school district, their teachers’, and their students’ performance based on variables such as high stakes testing (administered once per year) or attendance (of which districts have very limited control) is not realistic,” Deere said.

“It is my experience that assigning a school a single letter grade is not and has not been helpful to teachers, students, or districts,” she continued. “The value of any school district cannot be measured by a report card.”

Other districts included Mason and Paden, but as of press time last Tuesday, the superintendents had not returned calls for comments to the Okemah News Leader.