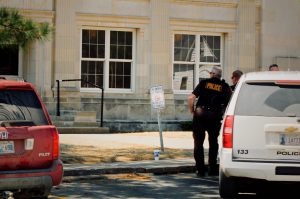 After a search of the buildings on the premises, no bomb was found.

Rasmussen said a man called the County Clerk’s office sometime around or just after 12:30 p.m. and said, “This is a bomb threat … tell the judge.”

Courthouse staff and officials were immediately evacuated to the exterior. Inmates were also evacuated from the fifth floor, where the jail is located, and taken to a holding area outside the courthouse, Rasmussen said.

It is unknown at this time who made the threat, pending further information from the sheriff’s office.

Courthouse staff were told to go home for the day, as local authorities awaited the arrival of the Oklahoma Highway Patrol Bomb Squad, which took a couple hours.

District Judge Lawrence Parish’s court was in session at the time of the threat, leading to the moving of his court proceedings to Okemah City Hall shortly after the bomb threat was made.

The OHP Bomb Squad arrived around 3 p.m. and checked the main building of the courthouse first, coming up with no such bomb or explosive device.

Bomb squad canines were on scene and assisted agents in the search.

From there, the sheriff said, they checked the out-buildings — again finding nothing — to clear the threat or possibility of an explosive.

The crime of calling in a fake threat is a felony, especially if the threat is called into a government building or office, such as Tuesday’s threat.

A follow-up on this story will be reported once the OSBI and Sheriff’s Office complete the pending investigation into who called in the threat.