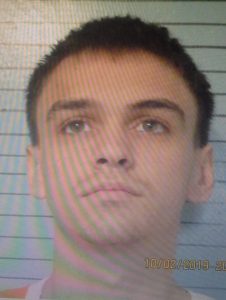 Wednesday, Oct. 2 was a busy day for Okemah Police as four people were taken into custody and booked into the county jail.

An investigation of a burglary at First Baptist Church Okemah led to the arrests of Kagan Balentine (a.k.a. Kagan Smith), 18, Justin Travis White, 39, and 59-year-old Karen Bailey. Police also arrested Seth Thomas Henry, 21, for his alleged role in an unrelated arson that occurred in September.
According to an affidavit, Assistant Chief of Police Doug Danker was dispatched to the church at about 8:15 Wednesday morning in reference to a burglary that occurred over night. Shannon Smith, an employee of the church, showed Danker where someone had gained entry by breaking a window on the east end of the church.
Danker observed that several rooms on all three levels of the church had been entered and items had been tossed around, but church employees were unsure what items were missing.
At around 3:30 p.m., Kurt Titsworth of the Oklahoma State Bureau of Investigation (OSBI) made contact with a suspect in the burglary, identified as Balentine. While talking with Balentine, Titsworth asked him what was in his pockets. Balentine produced a small plastic container that had marijuana inside. He later told police he smoked marijuana because he “liked to get high”but he did not have a medical marijuana card.
Titsworth took Balentine to the Okemah Police Department to question him about his involvement in the church burglary, and after being read his miranda rights, Balentine signed a waiver stating he was willing to talk with officers.
According to the affidavit, Balentine at first denied any involvement in the burglary, but later admitted, when questioned by Okemah Police Chief Ed Smith, he had committed the burglary after drinking liquor. Balentine told police he had taken some clothing and a large trash can from the church and took the items to an apartment on South 4rth Street. He also signed a statement admitting he had burglarized the church.
At 5:15 p.m., White and Bailey gave authorities consent to search their apartment located at 113 South Fourth Street. The search, conducted by officers from the Okemah Police Department, Okfuskee County Sheriff’s Department and the OSBI, was the result of the investigation of the church burglary.
The search yielded a high point brand 9mm semi-automatic handgun with its serial number defaced, an airsoft pistol, two street signs, digital scales, drug paraphernalia, marijuana and a plastic water bottle that had been converted into a makeshift bong.
Å large plastic container labeled “Ace Hardware”was also discovered, which contained clothing items, hymn books and a typewriter, all believed to have been taken from the church. Police also found a bag full of silverware, credit cards that did not belong to either White or Bailey, a Stihl weedeater and a property deed issued to O. Mac Smith.
According to a police report, White told officers three people, who he identified as Vickie Killman, Jeffrey Hart and Balentine, had been approaching him with various items to sell, which included tools and lawn equipment. White also told police Bailey had found the credit cards and the property deed in a dumpster.
White told investigators the handgun belonged to his father, who had left at it his residence and never picked it up. In addition, White claimed ownership of the marijuana and glass pipes, stating he smoked meth on occasion. White also admitted that he bought the weedeater from Hart for $25.
Bailey and White were both transported to the county jail and booked without incident.
At around 4:30 p.m., officers were alerted that Thomas, who had an outstanding warrant for arson, was at a house in Welty. As police were en route to the residence, Thomas was spotted walking down a nearby road and was apprehended.
Thomas and Mark Kevin Dodson were identified in surveillance video as suspects in an alleged arson that damaged the former home of the late Dr. Noel Miller and Dr. Bonnie Miller, located at 625 South Third Street. The house was set on fire twice between Sept. 15-16. Dodson was arrested on Saturday, Sept. 28.
On Sept. 17, Titsworth received a phone call from Thomas from a number which was believed to be Thomas’ cell phone number. Titsworth told Thomas he needed to visit with him about some things that had occurred over the weekend in Okemah. According to the affidavit, Thomas said he had been in Schulter, Oklahoma since Sept. 14, and when Titsworth tried to discuss a meeting, Thomas hung up the phone.
On Sept. 18, Titsworth obtained a Search Warrant for AT&T Mobility for phone records for Thomas’ cell phone number. A review of the records showed Thomas’ phone number had made and received calls and text messages between Sept. 14. and Sept. 17., hitting cellular towers within Okemah and Okfuskee County. His number had also pinged a cell tower 26 minutes prior to the Miller fire, according to the affidavit. A warrant for Thomas’ arrest was issued on Sept. 30.
Thomas faces charges of conspiracy, second degree arson and endangering human life during arson, all felonies.
Posted in Featured Stories

COVID Report for Okfuskee County, cases are up – no new deaths