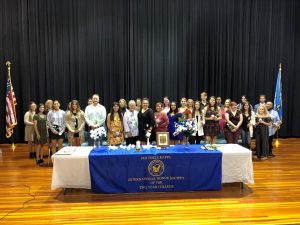 Students are selected based on their scholarship, leadership and commitment to community. The chapter provides programs, organizes activities and encourages participation in community service projects.

Requirements for membership in the honor society include: enrollment at an accredited two-year college with a Phi Theta Kappa chapter and an overall GPA of 3.5 with a minimum of 12 credit hours completed.

SSC Regent Marci Donaho served as the event’s guest speaker. Regent Donaho was appointed to the college in 2005 by Governor Brad Henry. She was reappointed in 2012 by Governor Mary Fallin and again in 2019 by Governor Kevin Stitt.

Donaho was a long-time public school educator who, for the past 22 years, has served as Executive Director of the Jasmine Moran Children’s Museum. She is a member and past president of the Seminole Chamber of Commerce. In 2002, she was named Seminole’s “Citizen of the Year.” Donaho serves on the Seminole School Board and was inducted into the Seminole Hall of Fame in 2015. She has been nominated three times as one of 50 “Women Making a Difference” in the State of Oklahoma, as recognized by the Journal Record newspaper.

SSC students inducted at the ceremony (arranged by hometown) were: