Area school board elections could be rescheduled
By Ken Childers
ONL Editor
Oklahoma State Election Board Secretary Paul Ziriax last week declared an election emergency for local elections being held in 74 counties on April 7, including Okfuskee County.
The election emergency declaration will require county election boards to accept resolutions adopted by the governing bodies of school districts, municipalities, technology districts and counties to move their April 7 elections to another date.
Regular and statutory elections could be rescheduled on June 30, the next available election date and the date of the State Primary Election. Special elections could be rescheduled for any election date allowed by law.
In Okfuskee County, school board elections (seat #5) are currently scheduled for April 7 in the Mason and Graham-Dustin districts. In the Mason district, the race is between incumbent Brien Dwayne Dodson and Jerold Smith. Sheena Proctor is challenging incumbent Ronda Flanagan for the seat on the Graham-Dustin board.
“We are in uncharted waters here, so I am hopeful we have found a sensible solution that is consistent with the spirit of the law and avoids bureaucratic overreach by state election officials,” Ziriax said. “As Oklahoma’s chief election official, I strongly urge school districts, municipalities, technology districts and counties with April 7 elections to take immediate action to reschedule and help efforts to flatten the COVID-19 curve.”
County Election Board Secretaries will reach out to the local governments holding elections in their counties to inform them of the election emergency and the option of rescheduling their April 7 elections.
A list of the elections scheduled on April 7 is available on the State Election Board website statelections.ok.gov. The State Election Board will update the list as local governments reschedule their elections.
Ziriax said voters who have questions about whether or not an election will be rescheduled are encouraged to contact the local government that scheduled the election.
View the official election emergency on the State Election Board website.
Posted in Area News 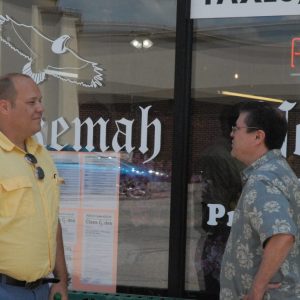