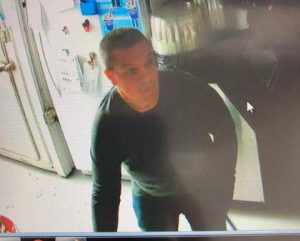 The serial burglar the OSBI requested assistance in identifying from surveillance photographs Tuesday has been identified as Charles Edward Rebert.

Rebert, 42, is the alleged burglar who robbed Dairy Boy Restaurant in Okemah

A felony charge for Burglary II has been filed in Okfuskee County along with a $500,000 warrant for his arrest.  Authorities in Logan County have also filed a felony arrest warrant for Burglary II and charges are pending/the investigation is ongoing in the other jurisdictions.

On May 21, 2018, Rebert was arrested by the McIntosh County Sheriff’s Office on an unrelated warrant from Texas.

The OSBI applauds the investigative efforts by all agencies involved, including the Oklahoma Highway Patrol, who identified Rebert from the media release.

Rebert is currently held in the McIntosh County Jail.

Rebert is a suspect in burglaries in Guthrie, Blackwell, Wetumka, Okemah, and Calvin, Okla. as well as in Sherman, Texas.