Towards the end of their show-stopping, headlining performance Thursday at the Pastures of Plenty during WoodyFest, Turnpike Troubadours lead singer Evan Felker made a special call out to two county commissioners and his father. 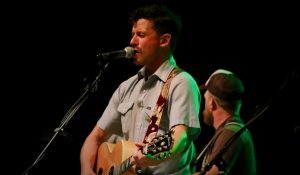 Okemah being the hometown of the popular singer/songwriter, it was no surprise, but it was heartfelt.

Felker said their hit song, “The Bird Hunters,” was dedicated to Terry Wilson, Danny Wilson and his father, Van Felker, from the stage before the band began playing the song.

Both Wilsons are Okfuskee County Commissioners and said they have known Evan Felker and his father for many years.

“Me and (Evan’s) dad have been friends since high school,” Terry Wilson said. “He is currently married to a second cousin of mine, so we have been close for years.”

Danny Wilson somewhat echoed that sentiment, stating he considers Evan and Van Felker to be family.

A few of the lyrics from “The Bird Hunters” seem to point to Danny Wilson and their family connection, as it goes: “Well, now Danny’s my buddy. We grew up like family; hunted this timber before we could drive.”

Both Terry and Danny Wilson said they still to this day hunt with Van and Evan Felker occasionally — “when they’re able.”

Van Felker lived in Okemah in his early years, then moved to southeast Oklahoma for much of his adult life, but now he has moved back to this area, Terry Wilson said.

Danny Wilson recalled a hunting story from when Evan was a younger man that brought laughter out of both Wilsons, and he and Terry reminisced on the fun and humorous times they had hunting around Okemah together with the Felkers.

The whole song seems to be written about the hunting days Felker experienced with the Wilsons, but really is a love song about heading back to “Cherokee County.”

After they finished, the band finalized the performance with an encore of “Long Hot Summer Day.” Thousands of people attended the popular band’s performance, which is a regular occurrence for WoodyFest.