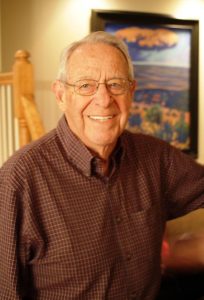 Robert Earl Davidson (Papa to his grandkids, Bob to his peers), born on December 31, 1934, in Okemah, Oklahoma, to the late Ramona Haight Davidson and the late Earl Davidson, passed away at age 83 on July 23, 2018, in Arlington, Texas.
Bob was married for 62 years to Frances Kay Middlebrook, also originally from Okemah. He is survived by his wife, Kay; his sons, Terry Davidson (married to Karen Kaska) and Randy Davidson (married to Lisa Fatzinger); daughter, Lori Davidson Kaufmann (married to Matt Kaufmann); brothers, William, David, Don, and Jerry; sister, Diane Cobb; grandchildren, Nikki Weinlein (married to Bill Weinlein), Christopher Davidson, Lincoln Davidson, Cody Kaufmann, Amelia Davidson, and Kayla Kaufmann; and great-grandchildren, Rory Weinlein and Zoey Weinlein. He is preceded in death by his elder sister, Ellen Moore.
As one of seven siblings growing up in Okemah, Oklahoma, Bob maintained close ties to his brothers and sisters, as they spread out across Oklahoma and Texas to raise their families. Though Bob’s career took his family west to Wichita Falls, Tex. and east to McAlester, Okla., he and Kay settled in Arlington, Tex. in 1967, where their family flourished for more than 50 years. Though he spent most of his life in Texas, Bob never forgot his roots in Okemah, where he started his “career” delivering the News Leader to a route that stayed in the Davidson family for many years. The Davidson family lived on Division, just below the Woody Guthrie house, and Okemah was always home, even as the siblings moved away.
Bob was devoted to his family and took great joy in boating, camping, fishing and traveling with them. He supported his children as they pursued sports and scouting, and he loved cheering for Texas football, especially as the Red River rivalry brought the Oklahoma and Texas side of the family together for good-natured competition.
Bob worked 40 years in the newspaper and graphic arts business as a typographer, printer and graphic designer, before retiring in 2000. He started out with newspaper printing operations in Okmulgee, Wichita Falls, and McAlester; before transitioning to type-setting companies in Dallas (TradeType of Dallas and Fort Worth Lino). Bob studied printing at Oklahoma State University in Okmulgee to learn his craft, and he lived firsthand the dramatic changes in printing as lead type and linotype typesetting gave way to computerized typesetting and printing processes. He was proud to work with some of the major graphic artists in North Texas.  He served in the Oklahoma National Guard.
Friends and family are welcome to attend the visitation on Thursday, July 26, from 1:00 to 2:00 p.m. at Wade Family Funeral Home, 4140 West Pioneer Pkwy, Arlington, Texas, 76013. Following that, there will be a funeral service from 2:00 to 3:00 p.m. at the same location, followed by burial at the Moore Memorial Gardens. Wade Family Funeral Home – Arlington is handling arrangements, 4140 West Pioneer Pkwy., Arlington, (817) 274-9233.
Bob battled Alzheimer’s Disease for the last years of his life, and the family suggests that anyone seeking to honor his memory consider donating to the Alzheimer’s Association (https://act.alz.org) or other organizations that support research and caregivers.