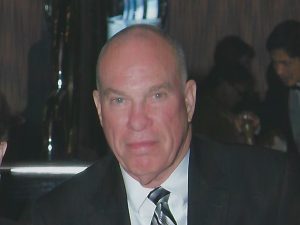 George Raymond McKown Jr. of McKinney, Texas passed away on July 19, 2018 at the age of 82.  He was born on December 22, 1935 to George Raymond Sr. and Frankie B. (Thorp) McKown in Miami, Oklahoma.  George grew up in Okemah, Oklahoma and graduated from Okemah High School in 1954. He received a bachelor’s degree in Business from Oklahoma State University in 1959 and was a member of the Sigma Chi Fraternity.  George married Joann Williamson on April 12, 1968 in Frankston, Texas.  George had a long career in retail management and was employed by the JCPenney Company and then later by the Trammell Crow Company.  He lived in multiple locations throughout Texas and moved to McKinney in 1985.

George proudly served his country in the National Guard and was an active community volunteer.  He served multiple years with the volunteer fire department of Southeast Harris County near Houston, Texas, and in McKinney he was an active volunteer as a Deputy Sheriff in the Collin County Sheriff’s Reserve Unit for more than 10 years. He enjoyed hunting and watching sports. George was a member of the First Baptist Church of McKinney.

He was preceded in death by his parents and his sister, Beverly Tatem.

The family would like to express their deepest gratitude to the personnel and caregivers of Grand Brook Memory Care and Anchor of Hope Hospice that were so closely involved in George’s care.

A memorial service will be held at 11:00 a.m., Wednesday, August 1, 2018 at First Baptist Church of McKinney Chapel, 1615 West Louisiana Street, McKinney, Texas 75069.
Memorial contributions may be made to the Lewy Body Dementia Association at https://www.lbda.org/donate.