Frank and Shirley Bleeker have lived in Cromwell for over 40 years. After a devastating fire following a storm in late July that destroyed their property, the longtime residents are now without a home, and their family is seeking the public’s help in rebuilding a place for the elderly couple. 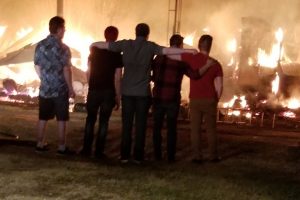 The cause of the fire was ruled inconclusive by the fire marshal, according to reports. However, it is believed by the family that lightning may have started the blaze, due to the timing of the incident.

The Bleekers’ son, Frank, Jr., said he and his family were taking his parents out for their 46th wedding anniversary when they received a phone call from one of their neighbors informing them that their house was on fire.

“We were taking them to dinner in Shawnee (for their anniversary), when one of their neighbors called and said a storm had just passed through and that now their house was burning,” Frank, Jr. said. “That’s what makes us believe it may have been lightning that caused it.”

It was a total loss, including the structure of the house, all their contents within and even their beloved pets, Frank, Jr. said.

The had lived there, in that house — on the west side of Highway 56 just inside Cromwell — for over 40 years.

“Currently, we are waiting on insurance,” Frank, Jr. said. “The adjuster came out, but since they have an older policy, the full-replacement won’t cover the whole cost of the house.”

“That’s why we came together and started a GoFundMe page to try and raise money to make up the difference,” he continued. “The hope is to clear off the location, rebuild them a home and move them back onto the property. That’s their home.”

The GoFundMe page can be found by searching “Bleeker Fire Recovery” at www.GoFundMe.com.

“We got a lot of donations to start with, but it’s kind of stalled,” Frank, Jr. said. “Every little bit helps, though, so we need all the support we can get.”

“Some people have tried giving them money, but they decline it because they feel like it would be a burden to people if they help, even though they need it,” the GoFundMe page reads. “If you know our parents, you know how generous they are with everyone. Many have asked to help them now in their time of need.

“If you are able to help, we sincerely thank you. If you currently are not in a position to do so, we ask that you give this a share (on Facebook), and over the next few weeks, please call them to see how they are holding up.”