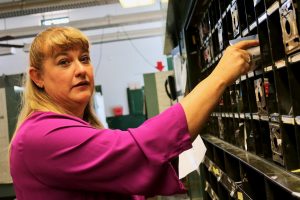 With a postal career that spans two decades, new Postmaster Donna Cue has taken over the helm of the Okemah Post Office and is settling in comfortably.

Cue started her successful career as a city carrier in Norman in 1997.

She held that position until 2003 before moving to Perry as a city carrier until 2008, at which time she was promoted to a clerk where she would stay until 2015.

From there, she continued her movement upward on the postal ladder and moved to Enid and promoted to supervisor until July 2018 when she was picked to be Postmaster in Okemah.

Since starting in mid-July, Cue said she has now moved to the city of her new post.

“So far, I have really enjoyed it,” she said of her experience so far. “I really like Okemah. It’s a nice, little town.”