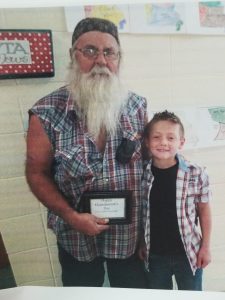 Friends and family of Clinton Thomas are still searching for the Dustin man who disappeared earlier this month. Thomas was last seen on camera on August 4 at 4 p.m. at the Dollar General in Wetumka.

According to Chief Deputy Cullen Fowler of the Hughes County Sheriff’s Department, the department has conducted several searches of his property, including with a cadaver dog, but the searches have not yielded any results or new clues to his whereabouts. Fowler stated that they have also searched the route from his home to the church parking lot where his pickup was found in Weleetka and all around Weleetka.

Currently, the Sheriff’s Department has other methods in the works to help located Thomas. “We are still investigating his disappearance,” stated Fowler. He went on to say that the family is very worried about Thomas and they are working very hard to help them track down Thomas. Fowler also informed ONL that they have no reason to suspect foul play at this time.

If anyone has seen Thomas or has any information about his whereabouts, they are encouraged to call the Hughes County Sheriff’s Department at 405-379-2203.