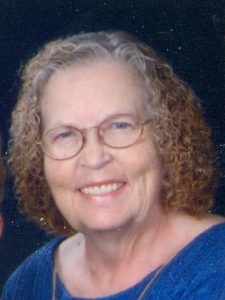 Ruthena, the daughter of J B and Waleeta (Beck) Collins, was a resident of Prague. She married Charles Tucker on September 23, 1967 in Durant, OK. Ruthena was a maternal, plain spoken and loving woman. She spent years caring for children, both her own and others’, and her home later became a favorite hangout for the children of the family and their friends. She was a great cook and it was understood that Ruthena would insist on feeding guests, hungry or not. All visitors to her home quickly became aware that there is a candy drawer filled with treats. Ruthena also had a competitive side which showed in one of her favorite pastimes, playing cards. She would say “pick your poison” or “what do you want me to beat you at today?”. Ruthena worked for several years at Terrell’s Lumber as a book keeper. She also enjoyed going to the lake, camping and fishing.

Ruthena was preceded in death by her parents.

Funeral services will be held on Friday, August 30, 2018 at 10:00 AM, at Prague First Baptist Church, with Brother Tim Emmons and Brother Rodney Hawkins officiating. Services are under the direction of Parks Brothers Funeral Service in Prague.