The Okemah Police Department and assisting agencies arrested 18-year-old Emmanuel Hummingbird after a nearly month-long ordeal that involved drive-by shootings and evasion before the suspect was located, according to an affidavit filed with the county. 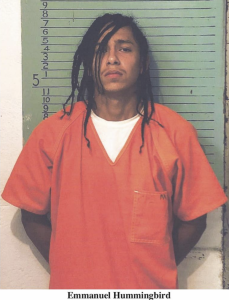 Hummingbird is being held in the Okfuskee County Jail on two felony complaints — using a vehicle in the discharging of a weapon and possession of a firearm after a former felony conviction.

It all started about 10:30 on the night of August 10 when a drive-by shooting occurred at the residence of 408 E. Atlanta Street.

Witnesses said a 2000 Chevrolet Suburban — tag number B6U03 — was damaged during the shooting, seemingly “by projectiles from a possible shotgun,” the affidavit said.

Officers made contact with those suspected where it was reported “the occupants … were cooperative in speaking with officers regarding the investigation.”

Things went fairly quite for some time until on August 23 — almost two weeks later — at about 3 a.m. when another drive-by shooting took place.

This time, at the residence of those that were suspected in carrying out the first shooting.

No one was injured in the shootings. Both involved the shooting of and damage to vehicles. At the second, it was reported that a 1983 Ford F-150 was possibly struck by a projectile from a .22 caliber weapon.

Similar to the first shooting, just reversed, those that were shot at on Aug. 23 suspected it to be the occupants of 408 E. Atlanta Street that did the shooting — certainly pointing to some kind of residential dispute.

The affidavit explains that the residents of the 310 South 9th Street house have video surveillance on the outside of the residence.

According to police, a dark colored SUV is seen on the camera — very similar to the one that was shot at by a possible shotgun almost two weeks before, leading police to believe the SUV was the one from the house on Atlanta Street.

Police suspected Hummingbird — known to reside or frequent the residence on Atlanta — to to be largely involved.

Hummingbird was not available for statements to officers concerning the shooting, but other residents at the home “denied any knowledge of the shootings,” officers reported.

However, before making contact with him, a third shooting occurred later that same day, Aug. 23, at about 10:30 p.m. This one saw a 2017 Subaru SUV get struck by projectiles from an unknown caliber weapon, the affidavit said.

What was believed to be the suspect-vehicle, a dark-colored SUV, was again seen on surveillance cameras during the shooting — this time, with damage visible to a back passenger-side window that had been “replaced with some sort of plastic covering,” officers reported.

A few days later on Aug. 26, an Okemah police officer observed Hummingbird and a juvenile male walking near the intersection of S. Woody Guthrie and Ash Street. Upon the officer attempting to make contact with Hummingbird and the juvenile, they fled on foot and were not located after a search of the surrounding area.

The two were believed to be seen again a few hours later by other officers involved in the search at Dollar General. Officers arrived at the business and made contact with the juvenile male, but Hummingbird had already fled again and was not found at that time.

Officers observed that the male juvenile to be intoxicated, so he was placed under arrest by an Okemah Police Department officer.

The juvenile did identify Hummingbird to be the one that was with him and said he had fled on foot in a northward direction into a wooded area.

Officers got out information concerning what the fleeing suspect was wearing at the time. Shortly thereafter, passersby said they had observed the male subject wearing those clothes running south from the wooded area across Hwy. 62.

Police believed the direction he was headed was towards his home, so they went there, the affidavit states.

Hummingbird was again not at the residence, but officers made contact with other occupants of the residence for more information.

Eventually, two juvenile subjects were brought to the Okemah Police Department for questioning, explaining to officers that Hummingbird had admitted “he had done something bad” before also claiming he “shot his ride” during the shooting.

Two of the juveniles claimed Hummingbird grabbed a “long rifle” at some time before the shootings and that “they went to a property east of Okemah and target practiced (sic),” according to the affidavit.

Okemah Police Department officers would eventually catch up to Hummingbird and place him under arrest for the aforementioned felony complaints of using a motor vehicle in the discharge of a weapon and possession of a firearm after receiving a former felony conviction.