At a special meeting of the Okemah City Council Thursday, councilors had a decision to make. In the wake of firing then-City Manager Bert Robison early last week, there was a major void in the city’s staff. 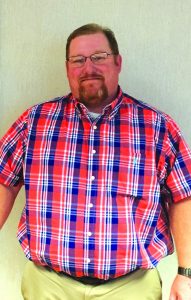 Dustin Danker, Okemah’s newly appointed interim city manager, stops for a photo at City Hall after his first meeting with the council in the capacity of acting manager. (KAY THOMPSON/News Leader)

OMMS is an “Oklahoma Interlocal Cooperative organization in which many Oklahoma cities come together to offer management assistance and services to cities and towns,” according to the handout Landers made available to the News Leader at the meeting.

Landers explained to the council that there would be an ‘annual fee’ of $2,000 to use OMMS services, noting that fee would not include the salary of the interim manager provided by the organization.

The OMMS option saw little discussion. Bacon expressed concern with some “pretty big projects” the city has coming up, worrying the OMMS process would take too much time.

“Time is of the essence,” the mayor said. “We need to hit the ground running.”

With that in mind, Fuller said former interim manager Jim Bill Copeland had done the job with little issue.

“Jim Bill (Copeland) knows the ins and outs, and I think he did a good job,” Fuller said.

He then made the motion to appoint Copeland to the interim position. No one spoke. After a few moments of silence, Fuller said, “The motion dies for lack of a second.”

At that point, a couple of attendees, employees of the City of Okemah in the gallery, spoke to the council.

Water Treatment Plant Supervisor Dustin Danker and Okemah Police Chief Ed “Skeeter” Smith told the council they would like to be considered for the position, should the council not have anyone else in mind.

The council asked Danker if he would need an increase in pay to take the position, to which he replied, “Yes, I think that’s fair.”

As to how much, Danker said he would take the same raise the council gave Copeland when he was interim manager before Robison’s hiring — a $5,000 per year increase.

With that, Landers made the motion to appoint Danker to the position of interim city manager, while keeping his current position as supervisor of the water plant.

The motion was seconded and subsequently passed 3-1 with Fuller voting against.

Danker was present in official capacity at the City Council meeting held on Monday, September 24.

“It’s a tough job, but I’m learning a lot,” informed Danker to the council, “the budget is a big piece of the pie….We have great department heads that know their job and so I know I can count on them.

“I’ll spend my time making sure everything is taken care of and learning this budget. I’ll make sure everybody is accountable for what they are doing. When we bring a city manager in, we ought to be able to hand him the ball to run with, that’s what I’m aiming for.”