Even to this day, he gets emotional during many parts of the story he tells of his cousin — the decorated Vietnam War hero he’d never gotten to actually meet before he killed in action.

Still, Johnny Johnson knew his cousin, knew his story and felt compelled to tell it. After all, that cousin was Michael C. Hope, the honorable pilot and Army Captain, called the “Oklahoma Indian” by his comrades. 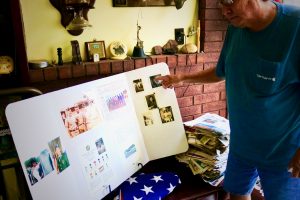 Okemah resident, Johnny Johnson, points to some old pictures of his cousin, decorated Vietnam vet Michael C. Hope, who was known as the “Oklahoma Indian” and is now the namesake of Del City’s new central fire station. Hope was an Army pilot who was shot down in Vietnam before amassing many medals and making his way to the ranks of Captain.   (JOSH ALLEN/News Leader)

The News Leader sat down with Johnson at his home in Okemah last week to hear his story of Hope, of his cousin’s courage and valor that would lead his hometown of Del City to give their newly built fire station his namesake in memoriam.

Sipping a cup of coffee in his dimly lit living room, Johnson recalled the day he and his family in got the call from his aunt and uncle in Del City to inform that Hope’s Army-issued plane had been shot down by Vietcong forces. His cousin was ‘missing in action’ … but there was hope.

“I’ll never forget that day … June 7, 1970,” Johnson said as heavy emotion made his voice break up. He sipped his coffee and continued. “I was a junior in high school at that time. We all knew Michael was a strong soldier, and I remember my mom and dad saying he was going to make it out.”

“It was about five or six days later, though, when the call came that he had been killed,” he said.

It was devastating for the tight-knit family. Hope was about 13 years older than Johnson, and his time enlisted kept him often gone. Despite not getting to really know him, he said he still felt very connected to him. That connection was through Hope’s mother, Johnson’s Aunt Lena.

“I spent a lot of time around her, and I just believe that Michael was so much like her,” he said. “Through her I knew him.”

Hope’s mother was the sister of Johnson’s father, Jimmy Johnson. The senior Johnson was a barber in Okemah for decades, well-known to the locals and loved by many.

“Yea … everyone knew Jimmy Johnson. My dad was a good man, and he loved this community,” Johnson said of his father proudly. “He has been a part of this community for generations.”

While the Johnsons stayed in Okemah, the Hopes planted their family in Del City. It’s there that Hope was born. He was part Seminole, part Creek. His wartime nickname suited him.

In the pictures Johnson showed of his cousin in the war with his Army brothers, Hope was easy to pick out. He was the “Oklahoma Indian.” His smile was bright with the joy of doing what he loved; his eyes piercing and deep like a soldier.

Hope enlisted in the Army in 1965 after spending seven years as a civilian employee at Tinker Air Force Base. Johnson said because of all that time watching the planes at Tinker, Hope wanted to be a pilot without doubt.

He didn’t just become a pilot, though. He became a great pilot. His missions were that of reconnaissance for the U.S. Army, gathering information on enemy forces and reporting it back to his command. His plane was unarmed. It wasn’t weaponry Hope used. His time in hostile air was intense with only sharp, solid and steady flying skills as his reliance.

He was only 29 years-old when his plane was shot down over the jungles of Vietname.

With is valiance and courage, he would eventually be promoted to an Army Captain. On his way there, he amassed many medals — the Purple Heart, a Vietnam Service Medal, National Defense Service Medal, the Vietnam Campaign Medal, to name only a few.

For reasons clear by this point and for his dedication to the Army and America, Captain Hope will now be memorialized. The fire station that will bear his name will open tomorrow in Del City. The “Michael Clinton Hope Memorial Building” will serve as the city’s central fire station.

When the dedication ceremony was held Friday, Johnson — along with many others — stood there proud and with pride, knowing his beloved cousin’s name will live on in the letters on a building that will serve as headquarters to a different kind of hero.

“I feel strongly that my duty is to carry on his name … to tell everyone his story,” Johnson said. “That’s what I’m doing and going to do.”