A woman called into the Weleetka Police Department dispatch late last month to report that she had been kidnapped and assaulted by a man before she was able to get away in the man’s Jeep and call police.

A subsequent investigation into the matter led to the arrest of 36-year-old Stanley Wayne Zackery, Jr. on various drug charges, along with kidnapping and aggravated assault and battery.

According to an affidavit filed with the Okfuskee County Courthouse, Weleetka Police Sergeant Cody Wright he got the call about 9:40 p.m. on August 26. The woman that called dispatch, identified as Natasha Jones, reported that Zackery had held her against her will and beaten her.

At the time she called police, she told dispatch she had “taken off in Zackery’s Jeep to get away from him and she was on a dirt road driving but didn’t know where she was at,” according to the affidavit.

Jones then lost contact with dispatch, while Sgt. Wright got with Officer David Reynolds to attempt to find the woman. By this time, Jones had called back into dispatch and said her phone had died and that she had made it to Holdenville Walmart.

Wright arrived to the Holdenville Police Department just after 11 p.m. and started the interview. Jones told the police sergeant that she and Zackery had been “talking” for about a month leading up to this incident.

The day before, Jones said, she and Zackery had been at the Golden Pony Casino in Clearview to “hang out.” She said Zackery offered to take her to dinner, and Jones said she agreed, leaving the casino with him.

At this point, Jones said Zackery told her he needed to “take care of something in Wetumka first, and Jones said OK, that she needed to check on a friend there anyways,” the affidavit said.

Jones said she had him drop her off at her friends house and he left, according to her statement to Sgt. Wright. 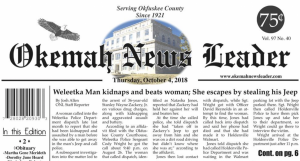 Top of current printed edition of the Okemah News Leader, featuring this story as the top headline and many others. Don’t forget to get your copy in order to keep up with the latest in Okfuskee County news. New edition weekly.

After a few hours, Jones said Zackery returned to get her. She noted that she could tell “he was high on something but didn’t think nothing else about it.”

According to the affidavit, the two left the friend’s house and while heading north on Highway 75, Zackery looked over at Jones and asked her to expose her breasts, though with much more explicit language.

Jones denied his request, and, according to Sgt. Wright’s report in the affidavit, Zackery then got “mad and aggravated.” She told him to pull over and let her out, so he started to slow down, but before she could open the door and get out, Zackery “grabbed (her) by the hair and pulled her back into the Jeep and took off real fast.”

Zackery then pulled down a dirt road and then into a field. Jones said at this point, he was still holding her by the hair.

“He then took his shirt and hat off and started to hit her multiple times in the head,” the report continues. “Jones said that he stopped for a minute and walked over to the car and got a pair of pliers and came back over and started to try to pull her teeth out, but she was fighting him off and holding her mouth closed, and he was shaking really bad, so he got even more mad and threw the pliers back towards the car and told her to stand up and fight him.”

Jones told Sgt. Wright that she wouldn’t stand up to fight him, so he stated to “beat on her again, and she said she blacked out for a little bit because the next thing she remembered was Zackery dragging her back to the Jeep.

Jones said they then drove around for a while on dirt roads before arriving at a residence in Weleetka. Zackery drug Jones into the house while holding her mouth. He told her “if she made a sound then her blood would be on his momma’s carpet and he would take her to ‘The Well,’ according to the affidavit.

From this point, Jones explained to Sgt. Wright that she was held against her will and endured a torture-like situation. For example, Jones said Zackery denied her food and water and the opportunity to use the bathroom. She said he threw her on the bed and beat her and would try to burn her with a torch lighter when she wouldn’t answer his questions.

Jones said she had lost track of time after they had “been there a while,” according to the affidavit, before Zackery told her to “get up, that they were going to ‘The Well.’”

Though they had arrived to that house in the night, Jones said when they left, it was daylight. Zackery stopped at the T-Mart in Weleetka, telling Jones he needed gas and that “if she made a sound or anything at all then he would kill her, and everybody in town knew him and wouldn’t do anything to him.”

This would prove to be Jones’ opportunity to escape. When Zackery went into the store, he had left the keys in the Jeep, so she rolled the windows up, locked the doors and started the car before jumping into the driver’s seat and speeding away to attempt to get away from him.

This is the point she initially called dispatch and made it to the Holdenville Walmart with the Jeep, which Sgt. Wright had impounded for further investigation. Wright took pictures of Jones injuries and made her submit a written statement of everything that she had told him.

A few days later, Sgt. Wright served a search warrant on the blue Jeep SUV belonging to Zackery. Inside the vehicle, the officer found paperwork indicating Zackery had just gotten out of prison, a paper belonging to Jones, a pair of yellow-handled pliers, a red-handled flathead screwdriver, three other screwdrivers and a black torch lighter. Wright also noted that the Vehicle Identification Number (VIN) plate had been tampered with.

According to the affidavit, Sgt. Wright, two other Weleetka PD officers, the K9 handler of Wetumka PD and two investigators with the Muskogee (Creek) Nation Tribal Police went to serve a search warrant on Zackery’s residence at 218 W. 7th Street in Weleetka.

Police made forceful entry into the home when no one would come to the door. They found Zackery inside, detained him and escorted him out to the porch before beginning their search, the affidavit said.

During the search, officers found a clear container with a crystal-like substance inside it that later tested positive for methamphetamine, two green baggies with a white powder residue, a cut straw (which Sgt. Wright said his training and experience indicated was used to snort drugs through the nose), a glass pipe used for smoking methamphetamine, another baggie with a green leafy substance in it and several prescription medications in pill bottles not prescribed to Zackery.

They also found an Alaska ID belonging to a Kayla Stratton, a baggie containing nine 12 gauge shotgun shells and a black-and-white bag full of women’s clothing that matched the description Jones had given them, according to the affidavit.