Running a business is hard … a successful business, even harder. Given the everyday obstacles and already normal, oftentimes difficult, circumstances involved, it’s safe to assume no business owner wants to add any strife with burglaries or robberies that aren’t getting solved or stopped. 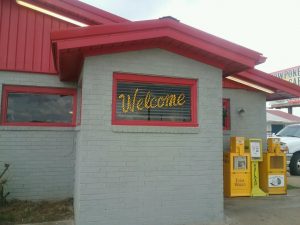 Jonathan and Beverly Rissler, owners of the convenient gas station and separate restaurant, called Cowpokes, at the Weleetka exit on Interstate 40, said their store has sustained a few robberies and a burglary over the last year.

Only one of those incidents led to an arrest, according to the Risslers.

The most recent criminal attempt at the store’s goods, came in the form of a burglary, happening just after midnight September 14-15 when no one was in the store.

Jonathan Rissler said a “thin, tall black male” broke into the front door around 12:45 a.m., about 45 minutes after the lights went off for the night and the clerk left the store.

Surveillance cameras recorded the thief’s movements as he took the store’s change safe (a small safe that Rissler said was for coins only). He then moved to the ATM machine in the store, which the thief managed to get open. Once inside, though, he hit more deterrents and gave up without getting any of the machine’s money.

“Even though he got it open, you could tell he was struggling,” Jonathan Rissler said. “From the surveillance footage, you can see that he got winded and gave up.”

The criminal then exited the store via the same door he’d broken into. He hadn’t gotten away with much, but this burglary was number four.

The change safe that had been stolen by the criminal was subsequently found in Okemah. The Risslers said they received a call from Okemah Police Department Officer Carl Fletcher informing them that their safe had been located.

Earlier this year, around springtime, a man walked into the store, brandished a handgun and demanded the money in the register. Luckily, the clerk handled things well and no one was hurt.

“He handled it the best way he could … that is such a scary situation, and we really worried that it was going to affect him,” Beverly Rissler said. “He has done great, though. We are proud of the way he dealt with the situation — very maturely.”

So, the store was again … robbed. The armed incident came on the heels of another robbery that had happened even earlier in the year.

A third incident involved a woman, who, according to the Risslers, had a prior knowledge of how the Pharaoh store’s register system works.

“If you don’t know how our system works, it would be very difficult to get our registers open,” Beverly Rissler said. “But if you know the system or have used it before, you can get it open in no time.”

The Risslers said a woman and an accomplice drew the clerk away from the register, and with the space, jumped behind the counter and grabbed what she could out of the register before exiting out the door. She or her accomplice or accomplices have not been caught in relation to the theft. 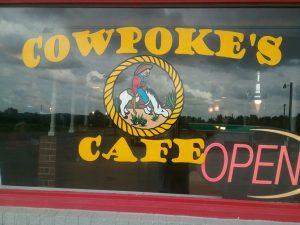 In each of these occurrences, statements were made to police, and surveillance footage was made available to officers. Save the one arrest of the armed robbery suspect, no suspects have been named nor have any arrests been made in relation to these burglaries or robberies.

Not much has been released by the Weleetka Police Department, the law enforcement agency which has jurisdiction of the store.

When staff at the News Leader were told of these incidents, Publisher Kay Thompson filed an open records with the Weleetka PD asking for any reports or documentation on the robberies and burglaries. Nothing was returned.

In a followup phone call, Weleetka PD officers told a News Leader reporter that the chief had said the open records request could not be fulfilled because these were ongoing investigations.

So … these cases are being investigated.

The Risslers are hopeful something can be done to deter future criminal activity, and are hopeful the police department will catch some of those responsible for past acts.

“We’ve been robbed so many times that it is concerning the customers,” Jonathan Rissler said. “We are worried about the business, and we want to be here for the community and stay here.”

“But we are worried, especially if this stuff keeps happening,” he continued. “We want our customers to know it’s safe.”

The Risslers are community-centered people. The type that don’t meet a stranger, and “love Jesus” and “doing things for the Lord.”

They have been at the location for eight years with their restaurant Cowpokes being an attraction to many.