“No person was ever honored for what he received. Honor has been the reward for what he gave,” – President Calvin Coolidge 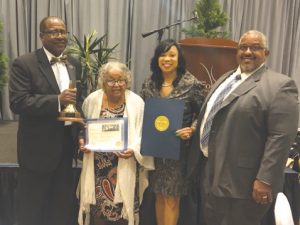 The Oklahoma History Center the Eighth Annual Oklahoma African American Educators Hall of Fame Ceremony and Banquet gave honor where honor was due, however these ten men and women were inducted into the Hall of Fame on Friday, September 28 told stories about the knowlege they imparted and the lasting legacy they left behind for generations to come.

Each year The Oklahoma African American Educators Hall of Fame honors ten inductees. This year one of the inductees was Clearview’s own Amelia Louise Swain Alford.

She was born in Clearview on November 30, 1923 to Lloyd V. and Rosie Swain. Mrs. Alford attended Clearview Elementary School and graduated from Clearview High School. She enrolled at Langston University where she earned a bachelor’s degree in Elementary Education in 1945.

Mrs. Alford believed that most of her students’ learning was the result of social interactions. Therefore, she designed her classroom to facilitate cooperative learning in the classroom setting. She ensured that learning was not competitive; instead, it was collaborative – allowing for all students to achieve and excel.
Mrs. Alford is proud that she and her late husband, Romeo Alford, Sr. founded the Clearview Rodeo and she still works to this day insuring the success of this annual event.

She and her late husband had one son Romeo Jr. He is married to his wife, Brenda and has one daughter, Jordan. The Alfords were married for 47 years.
Mrs. Alford would like to be remembered for her enduring encouragement.

The Oklahoma African American Educators Hall of Fame is located in Clearview and is operated by Dr. Donnie and Shirley Nero.

In 2010, The Oklahoma African American Educators Hall of Fame, Inc. was constituted and incorporated as a nonprofit organization to recognize and to honor those professional Oklahoma African Americans, who have taught at least five years in the State of Oklahoma, who exemplified a commitment while demonstrating exceptional abilities in realizing ideals, service or leadership in the teaching and guidance of their students.