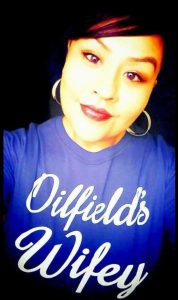 Perphina D. Blackgoat-Berryhill (Photo provided; photo of Factor was not available at the time of this publication)

In the early morning hours of Sunday, November 11, a single SUV lost control and wrecked about a mile west of Henryetta on Hornbeam Road in Okmulgee County.

The cause of the wreck is under investigation, according to Oklahoma Highway Patrol Trooper Michael Taylor, lead investigator on the scene.

According to the investigator’s report, the vehicle was a 2003 Cadillac Escalade, occupied by 37-year-old Perphina “Phina” Blackgoat-Berryhill, the driver, of Okemah, and passenger Jeanine Factor, 38, of Castle.

Taylor said both were pronounced deceased at the scene by Okmulgee County Emergency Medical Services, due to “massive injuries,” at approximately 2:31 a.m.

The investigative report noted that both “subjects were ejected during the collision.”

Taylor reported that seatbelts in the vehicle were “equipped but not in use” and the weather and roadway conditions to be “clear and dry.”

He also reported the condition of the driver to be under investigation, as with the cause of the accident, reporting an “odor of an alcoholic beverage.”

“This report is based upon the trooper’s investigation of this condition,” the report concludes. “It may contain the opinion of the trooper.”