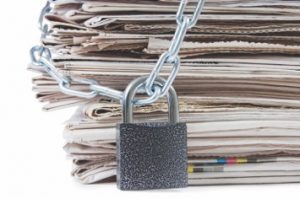 The legislation approved by the National Council and signed into law this week, places the Mvskoke Media under the control of Principal Chief James Floyd.

“This is a chilling attack on press freedom by the National Council,” said Tristan Ahtone, president of the Native American Journalists Association.

Floyd, who did not respond to an interview request, told the National Council that the tribe’s media would continue to be independent.

“I have not interfered with any story, tried to stop any story whatsoever and it (Mvskoke Media) will continue to be the same regardless of where it’s at,” Floyd said Thursday (November 8) in a YouTube video posted on Mvskoke Media’s Facebook page.

During an emergency meeting Thursday, the National Council briefly debated, then narrowly approved a measure to repeal the tribe’s Independent Media Act by a 7-6 vote.
Mvskoke Media Manger Sterling Cosper resigned in protest.

“I don’t want to be complicit in a non-independent press again,” Cosper said Friday, referring to the time before the passage of the Independent Media Act.

“I saw what the previous model did,” Cosper said. “If you are going to say that you are going to give citizens access to information, the structure has to reflect it in something like a bill.”

Cosper said no one approached him about the proposed change prior to it coming up Thursday.

National Council member James Jennings said he thought the bill was a “good piece of legislation.”

“The potential adoptions of NCA 18-180 represents not just a step, but a leap backwards in an era where journalists nationwide are already struggling with public misconceptions about the relationship between reporters and government officials,” according to a joint statement issued by the Oklahoma Chapter of the Society of Professional Journalists and FOI Oklahoma.