Charlye Mae Duke-Jones — On July 25, 1925, a baby girl was born to William Duke and Willie Syrester Albright-Duke in Cleveland, Oklahoma. To this union of ten siblings, she was the second oldest. Her parents, six brothers and two sisters preceded her in death. 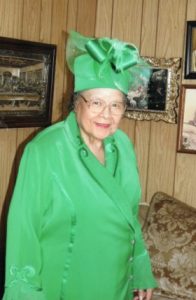 She professed her hope in Christ at an early age and as she was moved from Seminole County to Okfuskee County, so did her membership.

In the early 50’s, she was united with the St. Emanuel Baptist Church in Boley, Oklahoma and remained an active member until she became too ill to attend. She served as Sunday School Superintendent, Teacher, Mission President, Finance Secretary, Treasurer, a member of the choir and mother of the Church.

She attended school and became a licensed nurse and worked for the Creek Nation Hospital. On October 15, 1997, she began at the Liberty Baptist College, graduating with a Degree of Bachelor of Religious Education.

She worked as Site Manager for the Boley New Age Nutrition Outreach Facility for several years.

During her months of illness, she leaned heavily on the Lord, calling upon Him to help her bear the pain, but sometime later she was blessed to have Lesa to come and give her needed assistance. This lasted until she needed more care than Lesa could give so she was moved to a skilled facility where she remained until she was hospitalized. Her life’s journey ended Wednesday, December 5, 2018 at 11:15am.

She leaves to cherish her memory, her daughters, Zella & Rhonda both of Oklahoma City, Lesa and Zakar, her helper, of the home; one sister, Beatrice Alexander of Boley; fifteen grandchildren, a host of great-grandchildren, cousins, nephews nieces, other relatives and friends.

Service are under the direction of Parks Brothers Funeral Service of Prague.

An online guest book is available at Parksbrothers.net.