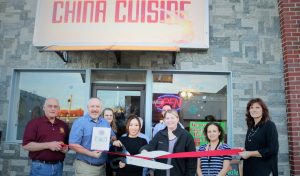 Members of the Okemah Chamber of Commerce welcome China Cuisine as its newest member with a ribbon cutting ceremony recently. (JOSHUA ALLEN/News Leader) 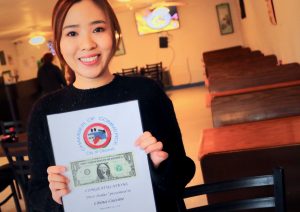 China Cuisine owner, Peng An, who goes by Alice, holds up the ceremonial ‘first dollar’ after celebrating a ribbon cutting ceremony recently in downtown Okemah where her restaurant on Broadway stands as the only Chinese food establishment in the city. (JOSHUA ALLEN/News Leader)

China Cuisine, located downtown at 315 West Broadway, opened for business in October and stands as the only restaurant serving food of its kind in the city.

This is no Chinese buffet, though. The sit-down-and-order-style restaurant features fresh cuisine that is prepared each day, made-to-order and offers various daily specials, according to the restaurant’s owner, Alice.

In China, Alice would likely go by Peng An, her native birth name, but it is custom for Chinese immigrants or citizens working with English-speaking countries to pick an English name, and Peng An chose Alice.

She moved to America in March 2013, but first to California for a few years before making the trek east. There she and her husband owned and operated a California-style Chinese restaurant where he served as chef.

Similarly, he serves as chef here in Okemah, as well.

Asked how they made it from California to Okemah and the reason for picking the small Oklahoma town, Alice said, “Family.”

She explained that she and her husband have family with a similar Chinese restaurant in Henryetta, as well as the location in Okemah. When they called and said they needed help, Alice and her husband sold their California restaurant and made the move.

Since moving to the hometown of Woody Guthrie, Alice said she likes being here.
“It’s slower here. It’s a small town with less stress,” she said. “Everyone is kind and knows each other.”

Several of the patrons that were there said the food was “amazing” and “very fresh.” One person remarking, “It’s the best Chinese food that I’ve had.”

“We like to give people fresh food (as opposed to a buffet),” Alice said. “All the food is prepared fresh by my husband, the chef.”

“We will have a different special every day of the week,” she continued. “The specials are our best and most popular dishes at a special price.”

She concluded by saying she wanted to bring a “taste of California-style Chinese food” to Okemah.

Alice lives with her husband and young son above the restaurant, making for not just new local business owners but also residents in the heart of the city.

Chamber President Alan Oatsvall and several chamber ambassadors were present for the ribbon cutting ceremony where they also presented Alice with the restaurant’s “First Dollar” in a frame.

Oatsvall said he is proud to welcome the new member with hopes their business is successful.