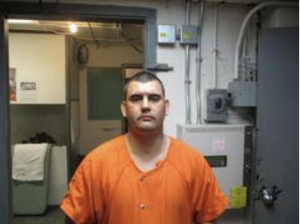 A local man is behind bars at the Okfuskee County Jail after allegedly shooting to death his wife’s mother with a shotgun during an altercation Saturday evening near Okemah.

The altercation that ended in murder involved 34-year-old Anthony Spain and his mother-in-law, Teresa Smith, who was allegedly killed by Spain after he shot her twice with a 12-gauge shotgun at his home, located at 369197 West Highway 56 near Okemah.

According to court documents, one gunshot hit Smith’s torso-area, the other her head.

Okfuskee County Sheriff Jim Rasmussen said he requested assistance from the Oklahoma State Bureau of Investigation (OSBI), which took the reins of the murder investigation, shortly after the shooting.

Spain’s wife, Sabrina Smith reportedly tried to intervene during the altercation between her mother and husband but was unsuccessful, according to her statements during questioning the night of the homicide.

She told investigators she witnessed the shooting before she “gathered her four children and left the residence,” OSBI Agent Derek White reported in an affidavit filed in the Okfuskee County District Court Monday.

According to that affidavit, Spain was arrested just after 5:30 the morning after the shooting (Sunday) by OSBI agents on a complaint of malicious homicide, pending the likely official filing of a first-degree murder charge by the Okfuskee County District Attorney’s Office.

The arrest came as a result of the OSBI agents’ investigation of the crime scene and subsequent questioning of Spain and Sabrina Smith, White reported.

Questioned separately — Spain at the Okemah Police Department and Sabrina Smith at the Okfuskee County Sheriff’s Office — the two gave somewhat similar statements concerning the timeline of events that night.

However, their statements were vastly different in implication — Spain claiming to agents he was defending himself and Sabrina Smith claiming her husband shot her mother twice after physically assaulting her and repeatedly muttering, “I didn’t want to do this,” according to the affidavit.

In his report, Agent White lays out some of the happenings of that Saturday evening as follows:

“On January 5, 2019, at about 7:36 p.m., Anthony Spain called 911 and reported his mother-in-law came at him with a knife and he shot her. Anthony reported his address as 369197 Highway 56. Okfuskee County deputies responded to 369197 Highway 56, west of Okemah, in Okfuskee County, and located Anthony Spain and Sabrina Smith at the residence. Deputies entered the residence and located a deceased female, later identified as Teresa Smith, in the living room of the residence with an apparent gunshot wound to the head. …”

Shortly after receiving the 911 call, White reported, a search warrant for the residence was obtained, leading to the processing of the crime scene for evidence by OSBI Crime Scene Agent Miles Keen.

The agent said he read Spain his Miranda rights, which were waived as Spain agreed to speak with agents, White reported.

Spain told White that “he returned home from drinking at a friend’s house” before he and Teresa Smith “engaged in an argument,” the agent reported.

After claiming she pushed him, Spain told White “he defended himself by pushing her onto the couch,” claiming, too, that Teresa Smith “scratched him on his arms,” White said. He claimed his wife, Sabrina Smith, intervened during this time, but the argument continued.

Spain then alleged Teresa Smith threatened him by saying she would “call family members to take care of (him),” according to the court document.

White’s report continued. At that point, Spain said he went up to his bedroom closet and retrieved his 12-gauge shotgun, which he claimed was to “defend himself,” White said.

Returning downstairs with the shotgun, Spain told the agent “he fired a shot into the ceiling of the living room to get (Teresa) Smith to leave.”

He then told agents Teresa Smith “raised her hand up and he saw something shiny in (her) hand” before claiming “he fired the shotgun at (Teresa) Smith, knocking her to the ground,” White said.

Spain was most recently an employee of Okemah’s Fiesta Mart on Woody Guthrie.

According to one news report, published a day or so after the shooting, Spain was also shot during the incident, but Sheriff Rasmussen denied that, stating he was “fine” and not injured.