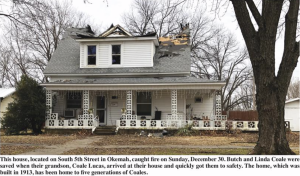 The Okemah Fire Department were called out to two house fires in as many days just as last year came to a close.

Fire Chief Roy Neal said the first of the two fires took place December 30 on South 5th Street where a two-story house had caught fire somewhere in the upstairs area.

The upstairs was lost to the flames, while the downstairs mainly suffered water damage from the firefighter’s hose.

Neal explained the grandson of the home’s owners pulled into the drive, noticed the house was on fire and promptly got his grandmother and grandfather out of the structure.

This one resulted in a total loss, Neal said.

“We were only there for about an hour and a half to two hours on that one,” the fire chief said. “No one was home, and we didn’t get out there until it was basically already gone.”

No injuries were sustained in either fire.

Sales and use tax revenue up for city, down for county in August

Summoned for jury duty? Report to the fair barn, not the courthouse