Authorities believe it to be missing friends from Temple, Texas 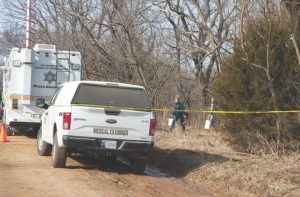 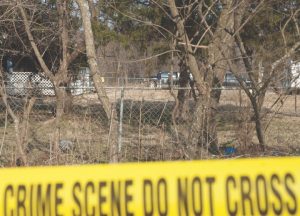 What started out as a missing persons case has now turned into a double homicide, and Okfuskee County is at the center of the mystery some 334 miles north of where the story began.

Long-time friends, Michael Swearingin, 32, and Jenna Scott, 28, were both reported missing from Temple, Tex., on Jan. 4.

According to the Temple Daily Telegram, the friends were last seen at 3 a.m. on Jan. 4 in a gray Hyundai Genesis. That vehicle was later found abandoned in Austin, Tex.

Okfuskee County Sheriff Jim Rasmussen reached out to the Okemah News Leader on Tuesday morning to inform the public of the ongoing situation. Rasmussen stated there was a search being conducted on E 1140 Road south of Okemah but couldn’t release much more than that due to it being early in the investigation.

Once on the scene, Undersheriff R.L. Wilbourn told ONL that because of the early stages of the investigation that not much could be released at that time. He did say they were assisting Texas officials and Oklahoma State Bureau of Investigation (OSBI) agents in conducting a search and that the local community had nothing to worry about.

OSBI Public Information Officer Beth Green confirmed that “the OSBI was requested to assist Temple Police Department (TX) investigators. Investigative information led investigators to rural Okfuskee County, where a homicide investigation is underway. The identity of the victim(s) and cause(s) and manner(s) of death will be determined at autopsy by the Office of the Chief Medical Examiner.” She added that all further media and information requests should be made to the Temple Police Department.

News Leader reached out to the Ellen Morton, PIO for Temple PD. She released that, “the Temple Police Department has received notification that the bodies of two deceased individuals have been located and recovered by the Oklahoma State Medical Examiners Office and the Oklahoma State Bureau of Investigations. The preliminary investigation leads detectives to believe that the bodies recovered are that of Jenna Scott and Michael Swearingin.

The Oklahoma State Medical Examiners Office will be responsible for making the positive identifications at autopsy. The Scott and Swearingin families have been notified of this preliminary identification.” She also added that to protect the integrity of the ongoing investigation, no further information would be released at this time.

Also according to an article in the Temple Daily Telegram, Scott’s former boyfriend, Cedric Joseph Marks, 44, was arrested and jailed in Grand Rapids, Mich., on a Temple warrant. Marks was charged with burglary of a habitation with intent to commit another felony. The charge against Marks is a first-degree felony, according to the Texas Penal Code. Scott filed a complaint against Marks after an incident reportedly occurred in August 2018 at her home in the 7700 block of Redbrush in Temple.

However, Marks has not been named as a suspect by Temple Police in the disappearances of Swearingin and Scott. It is also not known as of press time on Tuesday whether Marks has any direct ties to Okfuskee County or the property where the bodies were recovered.