Students and faculty were evacuated from a Dustin-Graham Public Schools campus last week after a student found a handwritten bomb threat on the wall of the bathroom.

Okfuskee County Sheriff Jim Rasmussen explained at the time of finding the threat that it was being taken seriously and contacted the Oklahoma Highway Patrol Bomb Squad. 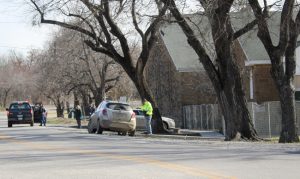 “Basically, a student found a message written on the wall of the bathroom threatening to ‘blow up the school tomorrow,’” the sheriff said from the scene of the threat. “Since we do not know exactly when it was written, ‘tomorrow’ could be today.”

The threat was found Thursday, January 24.

Rasmussen said shortly after agencies responded, the students of the rural high school had all been evacuated and taken to the Dustin campus for pickup.

A Dustin-Graham staff member, asking to be unnamed, told the News Leader just after the day of the incident, no comment could be made, noting her supervisors were all “really busy” in the wake of the situation.

Rasmussen explained the bathroom had been cleaned around 2:30 p.m. the Wednesday before and the message was reportedly not there.

He also noted a game with Wetumka had been held at the high school at the end of the day that Wednesday.

Rasmussen said OHP sent a team of three bomb detection dogs to go through the school and check it for explosives.

“Hopefully, this is just a kid being stupid and there’s not a bomb in the school,” the sheriff said. “Otherwise, obviously, it’s a real waste of manpower and resources … lunch was already ready to eat, so it’s sitting there going bad now, and the kids missed their lunch.”

“The students all had to be bused to another school, and (if there is no actual threat of a bomb in the school) it’s a big waste of time and money for the school and law enforcement.”

The OHP bomb-detection dogs found no such bomb, searching the entire campus, parking lot, buses and other school property.

Even still, Rasmussen said his team was there for the students and faculty, though it was deemed safe after no explosives were found.

And on hand they were. Rasmussen said he and three other deputies stayed in the cafeteria the morning following the incident to ensure the students were safe and check bags. Nothing was found.

Because the buses were in question at the school, Graham High reached out to Weleetka, which offered its school buses that Friday morning to get the Graham High School students to and from school.

No one was injured during the incident and no explosive, trace of a bomb or indication one had been placed were found.

Graham-Dustin Public Schools is a combined school district in Okfuskee and Hughes Counties, near the county lines, just south of Henryetta and east of Weleetka. The administration office and Graham High School are within Okfuskee County, while Dustin Elementary is contained within Hughes County.