What started as the fixing of a collapsed sewer line became a chance for the City of Okemah to improve its infrastructure after additional problems were identified and fixed. 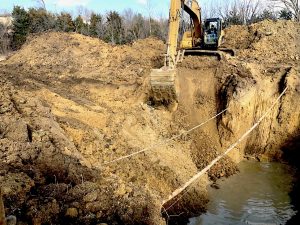 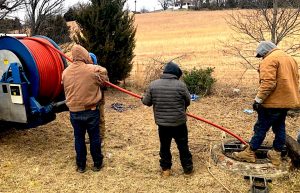 City crews dug a 26’ deep hole week before last to repair what they thought was the only issue — a collapsed 10” sewer line. Interim City Manager Dustin Danker said the collapsed pipe was one of the main sewer lines for the south side of Okemah.

The area of work was on Frontage Road, near Interstate 40.

Crews identified and repaired the problem, but Danker said the following week, the sewer main was completely stopped up.

The interim manager said the stopping up of the 10” sewer main led to slow drainage in places and backing up issues — though “not in anyone’s home.”

The City’s crews only had the equipment to dig down and fix the initial collapsed pipe, so calling in a plumbing contractor became a necessity.

“Once we realized we had a bigger issue (last week), we called in a contractor to clean out the (sewer) main,” Danker said. “The contractor also sent a snake camera down the line, so we could see what was going on and see any additional problems that needed to be fixed.”

The video inspection allowed for a more thorough assessment of any issues with the 10” sewer main, Danker said, allowing the contractor and City of Okemah crews to better fix issues they may have not otherwise known about at that time.

“This is a good example of how some issues lead to the discovery of other problems,” he said. “Since we were already there to fix the collapsed pipe, I saw it as an opportunity to call in a contractor to clean out the pipe and locate any other issues we needed to fix.”

Danker said in subsequent checks of the main sewer line, no other problems have been found, and the repairs done over the last couple weeks have fixed any issues with the line.