The First Baptist Church’s time without an official pastor leading its congregation is over after recently welcoming a new pastor and his family to lead the place of worship. 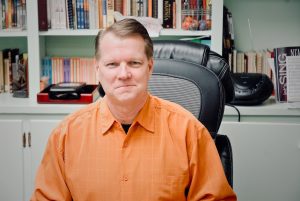 Clayton Griggs and family moved to Okemah from Tulsa towards the end of 2018 to take over at the helm of the historic Baptist church.

Most recently Griggs was the pastor of Glenwood Baptist Church in Tulsa, though he has spent over three decades in ministry — 11 as a youth pastor and more than 20 in the lead pastor role.

That experience is also spread out over three states, Griggs said during a pleasant conversation at the Okemah News Leader office last week.

“Most of the places (my family and I) have pastored have been smaller, county-seat communities in Oklahoma, Arkansas and Texas, much like Okemah,” Griggs said.

As for how he is liking Okemah, the pastor said he likes the community, noting the favorability of its “close proximity to Tulsa and the Oklahoma City area.”

He said he has felt welcomed by the First Baptist Church family, speaking highly of the church’s leadership during the couple-year long time it went without an official lead pastor.

“Paul Jones, who served as interim pastor for at least a year (of that time without a pastor), did a fantastic job leading the church,” Griggs said. “I don’t want to take anything away from what he did, but we are proud to be here.”

Griggs and his wife, Tammy, have a 23-year-old daughter who works for the United States Attorney’s Office.

Tammy Griggs is a teacher mentor at Tulsa Public Schools, which drew the comedic line from Griggs, “She’s a teacher that teaches other teachers.”

Griggs said the First Baptist Church in Okemah is always open to those looking for a church home, standing ready to welcome anyone in that needs a place.

His preaching style is welcoming and largely centered on scripture from Holy Bible. He said often his Sunday services follow topical series. Other services during the week, like Wednesdays, for example, are reserved for more Biblical exposition and verse-by-verse, book-by-book teaching.

First Baptist Church of Okemah is located at 120 South 6th Street. For more information, call the church at 918.623.0826 or visit its website at www.fbcokemah.com.

The church can also be found on Facebook at First Baptist Church Okemah.